Advertisement
The Newspaper for the Future of Miami
Connect with us:
Front Page » Opinion » Take Melreese off the table and establish an assets trust

Take Melreese off the table and establish an assets trust

As Miami decides this week whether to tear up Melreese, its only golf course, it’s long past time to create a trust to protect city treasures from abandonment, decay and greed and to fulfill their potential as public assets.

That’s true of Maurice A. Ferré Park, where the public is seeking a conservancy. That showcase park serving two museums should be part of a larger nonprofit entity with an outside board created to shepherd all city assets.

The money-losing but historic Olympia Theater – a treasure handed to the city by Maurice Gusman only because parking board chairman Col. Mitchell Wolfson would protect it from the ravages of time and city hall – was recently offered to Miami Dade College, which said no. An asset trust could restore the theater to greatness.

There’s good reason for an asset trust: over time, the city has been a poor steward. The asset trust we’ve long proposed is more timely than ever with Melreese, the Olympia building and Ferré Park all in the headlines.

Miami historically has acquired assets it has not maintained, so assets become losses. As one attorney noted to us last week, city hall virtually ignores operating and maintenance costs when it acquires major assets and seldom funds those costs properly. An asset trust would put such vital concerns front and center.

The city let its Coconut Grove Convention Center rot until cable series “Burn Notice” sought a production hub and leased the site for filming. After that, the city tore down the center.

Three decades ago the city built the Miami Arena for the Miami Heat, but team owners quickly sought an even better site, got AmericanAirlines Arena and exited. The city wound up selling the old arena, keeping nothing after it paid off construction bonds. The new owner leveled the arena for development.

Bayfront Park had two assets, a laser tower you’ve never heard of and the Mildred and Claude and Pepper Fountain, poster child for city neglect.

The fountain was a splashy centerpiece of the 32-acre park. The city didn’t skimp on the $3.25 million fountain, designed by famed Isamu Noguchi. It opened in 1990, shooting out computerized plumes. Then the city discovered it cost $61,000 a year to run and it cut water shows to lunch hours and 90 minutes a night. Next it ripped out the million-dollar-plus plumbing. Now we have a bone-dry, 170-foot-diameter basin.

Fortunately, to save money the city gave the county its airport and seaport, thus preserving our key economic engines from the city’s “care.”

Officials must create a trust to protect assets over decades, not election cycles. Mayors and commissioners will come into office knowing they won’t be able to sell or lease land on Watson Island or marinas on Virginia Key or the Miami Marine Stadium. 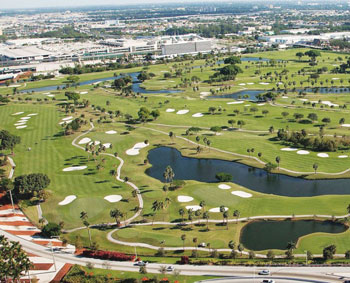 The city’s Melreese Golf Course is targeted to become a massive multi-use project.

As commissioners this week weigh a no-bid lease of Melreese Golf Course for what could be Miami’s largest private development, bigger than multi-block Brickell Citycentre and with even more retail and offices, they should call time out to think carefully.

That planned development and its soccer field should be private decisions by developers for their own land, not public land. It should not mean stripping the City of Miami of its largest green asset with the promise that citizens will get back less than half of it as green space plus rent.

The prime decision now is how to protect all the city’s major assets. We support the admirable concept of a Ferré Park conservancy, but a conservancy should have a far broader array of assets under its umbrella, supported not just by fickle city funding but also by public donations and other sources to which a not-for-profit would have access.

An asset trust could look to charitable, federal, state and private funders and would have a tight focus: to conserve, promote and put to their highest uses the city’s assets.

That would include deciding what to do about Miami Marine Stadium, and how. Restoration there was former Mayor Tomás Regalado’s main election pledge, but even with that focus he couldn’t make it happen in eight years. A trust with multiple funding streams would be better positioned than elected officials.

One quibble with an asset trust is that it creates a new layer of bureaucracy: another board that looks at what elected officials now do.

Unfortunately, no matter how well-intentioned individual Miami officials have been, for decades they collectively let assets like the marine stadium and Orange Bowl rot. They sold or leased lands to developers for a bit of cash that left residents poorer overall with the asset loss, such as tying up Watson Island land for development for almost two decades with no payback at all. Sometimes, they simply gave assets away, like the former Orange Bowl land for Marlins Stadium or handing the county cash generators like Miami International Airport and the Port of Miami.

A trust to preserve, protect and advance city assets would never have done any of that.

Establishing such a trust is complex. The city should look at the best examples elsewhere.

Meanwhile, the mayor and commission should bar all asset giveaways and deals as they get the ball rolling toward a trust. They can start this week by taking Melreese off the table.