Advertisement
The Newspaper for the Future of Miami
Connect with us:
Front Page » Top Stories » SR 836 Signature bridge, double-deck viaduct roll ahead 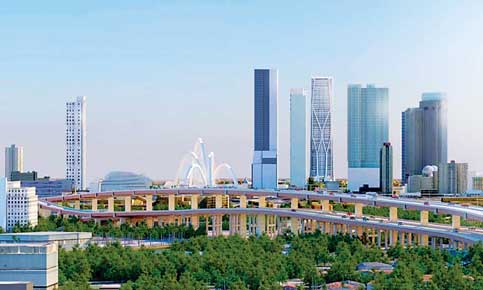 The I-395/SR 836/I-95 Design-Build Project in the heart of the City of Miami is reported progressing steadily, with regular notices about lane closures and other information for area residents and motorists.

Up-to-date details are at the project’s website, www.i-395miami.com, from the Florida Department of Transportation (FDOT).

The work includes a “signature bridge” over Northeast Second Avenue and Biscayne Boulevard, an upper deck of traffic built over SR 836 and the Miami River, and the addition of one lane to the northbound entrance to I-95.

The up-to-the-minute status report from Mr. Gonzalez offers a breakdown of some ongoing work and future activities along the three project corridors.

On the I-95 portion, the contractor continues work on extending an auxiliary lane on northbound I-95 from Northwest 17th Street to 29th Street.

This auxiliary lane will receive the added traffic from the eastbound SR 836 ramp to northbound I-95, which will be widened to two lanes as part of the project that will reduce congestion and enhance traffic flow.

“The auxiliary lane is expected to be opened to traffic in January 2020,” wrote Mr. Gonzalez.

Ongoing work on I-95 between Northwest 17th and 29th streets includes new drainage, relocation of the median wall and overhead sign structures, and new concrete pavement.

“The contractor will implement full night-time closures on I-95 from SR 836/I-395 to SR 112/I-195 this week and in the coming weeks for the erection of new overhead sign structures and removal of existing ones,” he said.

In addition to ongoing full I-95 closures, drivers should expect night-time lane closures on I-95 between Northwest Eighth and 29th streets.

On the targeted stretch of SR 836, two work zones have been established along eastbound SR 836, one between Northwest 17th Avenue and the Miami River and another from Northwest 12th Avenue to I-95.

“The contractor is driving concrete piles on the south side of SR 836 at NW 17 Avenue as well as working on removing existing beams to allow for the widening of the bridges in the area,” Mr. Gonzalez wrote.

Further to the east, the contractor is starting to drive piles this week on the south side of SR 836 for widening between Northwest 12th Avenue and I-95. In addition, foundation work for the widening of the eastbound SR 836 ramp to northbound I-95 continues.

Work is being done during the day within the established work zone and at night when lane closures are necessary, he said.

The additional lane on the eastbound SR 836 ramp to northbound I-95 is expected to open in the fall of 2020.

In the coming weeks, pile driving will also begin adjacent to the Northwest 17th Avenue ramp to westbound SR 836 that will require closure of the ramp during the pile driving.

On the I-395 portion, the contractor has established a work zone on the eastbound I-395 local connector road from I-95 to approximately Northwest First Avenue to prepare for a traffic shift in late October, when eastbound I-395 traffic will be shifted to the right in order to open up additional work zones, Mr. Gonzalez said.

The permanent closure of Northeast 12th Street was implemented Aug. 12 and the contractor is working on utility relocation in the area as well as on Northeast 13th Street between Biscayne Boulevard and Northeast Second Avenue.

Daytime lane closures on Northeast 13th Street between Biscayne Boulevard and Northeast Second Street will be implemented between 9 a.m. and 3:30 p.m. in order to widen the road and add a lane. The contractor is currently conducting Auger Cast Pile (ACP) field testing (for bridge foundations) along the south side of I-395. The Auger Cast Test Pile program is expected to last about a month and will be followed by permanent bridge foundation work in early November.

In order to open up areas to construct the permanent bridge foundations, sections of the existing WB I-395 that were closed as part of the Northeast 12th Street closure are being removed.

Mr. Gonzalez said drivers can sign up for construction alerts and get information on construction and lane closures at www.I-395miami.com.

An added benefit to improved freeway surfaces is the plan to reconnect areas to downtown, including Overtown, Edgewater and the Omni neighborhood.

In late February, Miami commissioners approved the first step of a deal with the transportation department to help design and manage several blocks of land under a rebuilt I-395.

The city manager was authorized to execute an agreement “for the City of Miami to collaborate in the development and coordination of the I-395 Heritage Trail/Signature Bridge Underdeck Project” along I-395/State Road 836 between Northwest Third Avenue and Biscayne Bay.

The agreement sets a timeline of when elements such as conceptual design, and a maintenance and operations plan will be provided. The agreement also lays out a working relationship and understanding of roles as well as preparing for additional agreements to come.

The transportation department will be responsible for construction of the underdeck based on city-provided designs.