Advertisement
The Newspaper for the Future of Miami
Connect with us:
Front Page » Real Estate » River Land near Health District adds green space 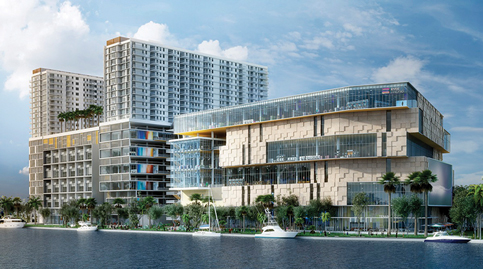 Land abutting the rising River Landing mixed-use project near the Health District is set to be transformed into 1.5 acres of green space with the Miami City Commission’s approval.

The commission is to vote today to amend the development agreement to require certain improvements on the site acquired by the River Landing Conservation Foundation.

Back in 2017, the foundation acquired the 1280 NW 11th St. property from Miami-Dade County after it was spelled out in the 2013 development contract that the developers must try to acquire the 1.5-acre site. The property is currently a parking lot.

According to the declaration of restrictions, the property can solely be used by the foundation to “construct, maintain and create pedestrian walkways on the boundary of the property and to enhance, beautify, landscape and light the walkways along the banks of the Miami River, and to build create and maintain sea-wall improvements greenways along the north side of the Miami River.”

The foundation will fund about $4 million in construction to transform the parking lot to green space that satisfies the uses spelled out in the county contract.

The River Landing site is the location of the former Mahi Shrine Auditorium, which was demolished in 2014.

The walkways and beautification of the banks that will result from the River Landing project will tie into Riverwalk, also known as the Miami River Greenway, which is 65% complete.