Advertisement
The Newspaper for the Future of Miami
Connect with us:
Front Page » Government » Miami-Dade, cities target docks for waterborne transit 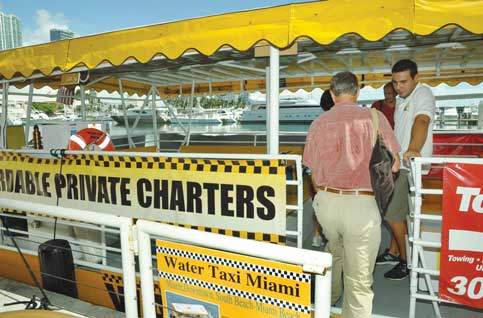 Miami-Dade and the cities of Miami and Miami Beach have been collaborating to identify potential docking locations for waterborne transit services between the two municipalities across Biscayne Bay, county Transportation Director Alice Bravo said last week.

Finding places for water transit vessels to dock that have been or can be upgraded with connections to other forms of transportation is one of four key obstacles Ms. Bravo said her department must surmount.

The infrastructure question is longstanding, remarked on in numerous county studies dating as far back as 2003, as well as “many studies, master plans, letters of support and resolutions” by both cities, a directive that county lawmakers approved Sept. 4 said.

But unresolved issues persist, and both cities “have limitations” in accommodating floating transit services across the bay, Ms. Bravo said.

Another issue is figuring out who will provide the service. During the last several years, she said, the county has spoken with several companies that could potentially fill the gap, including local companies Water Taxi Miami, Island Queen and Cigarette Racing; United States companies Hornblower, Poseidon Ferry LLC, Nouvoyage and Seastreak; and international companies VanDutch, SeaBubbles and Baja Ferries.

Upon deciding on any of those candidates, a combination of a few or another entity altogether, the county must then determine how to fund the service. As it stands, the county’s Department of Transportation and Public Works does not have a budget for waterborne transit.

However, Ms. Higgins’ directive also authorized the mayor’s office to apply for state and federal funding for such services, and the county’s transportation planning board has allocated funds for waterborne transit through fiscal 2024.

“A public-private partnership may be required,” Ms. Bravo said. “We may explore this option in the near future.”

Then there’s the matter of how big a vessel to use, she added, as size would determine where it could dock and routes it would take. A larger vessel, for instance, would be limited to running east-to-west or on another path that doesn’t require opening drawbridges that cross the bay.

A waterborne commuter service between the two cities presents several benefits, one being a reduction in roadway congestion – a growing issue unlikely to be reversed without alternative modes of transportation being available.

The service could also be more flexible than its land-based analogue, Ms. Bravo said.

“As our development pattern continues to evolve and new communities and job centers emerge, waterborne transportation provides a transit mode that can be implemented quickly, serving routes that are easily modified to meet demand,” she said.

And as those who have ridden ferries in Staten Island, Block Island, Washington State and the Alaska Marine Highway System – among others – can attest, foregoing bridges and tunnels in favor of floating conveyance is simply a more satisfying way to travel.

“Commuters and tourists value the relative serenity that this type of service offers,” Ms. Bravo said. “Waterborne transportation can become as important to the rider as the destination itself.”