Advertisement
The Newspaper for the Future of Miami
Connect with us:
Front Page » Top Stories » Ferris wheel spins around at Bayside with bigger deal

Ferris wheel spins around at Bayside with bigger deal 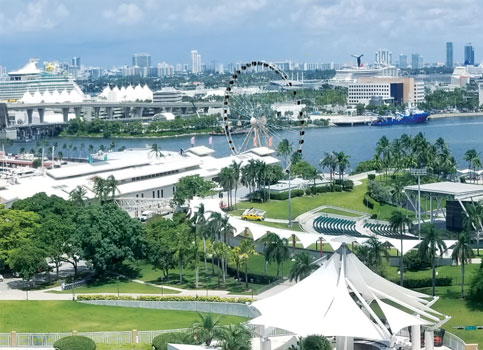 Miami commissioners today (10/24) are to again debate a 176-foot Ferris wheel at Bayside, with a new offer on the table for a bigger city revenue cut that reflects last month’s contentious call for the city to do better on the deal.

An agenda resolution would authorize the city manager to amend a lease between the city and Bayside Marketplace LLC to allow for up to 190 feet for the Ferris wheel. In exchange, the city would get 12% of Bayside’s revenues from the attraction, according to the draft amendment. Privately operated Bayside sits on city-owned land and would in turn lease space for the wheel.

The commission didn’t act last month on the attraction, adjourning before a vote. But doubling the city’s revenue might not go far enough to win enough votes from the commission.

During the earlier debate, Commissioner Joe Carollo argued that the city was offering an exception to allow for a higher structure than the lease agreement permits and scoffed at the deal that Bayside and the city administration had cut.

The city would not be forfeiting its air rights, but rather providing a waiver solely for the attraction.

When Bayside’s attorneys offered to double the city’s revenue share from 6% to 12%, Mr. Carollo still said the city was getting short-changed, suggesting Bayside hand over half the revenue it would be earning.

“I think it’s going to be a huge addition to Miami, but air rights are very valuable and Bayside is going to make a tremendous amount of additional dollars on this lease for themselves,” Mr. Carollo said at the Sept. 26 meeting. “The City of Miami cannot keep on going doing deals for itself that we’re shortchanging the residents of Miami in what we do.”

Commissioners Keon Hardemon and Manolo Reyes agreed the city should be getting a larger revenue share because the Ferris wheel couldn’t be installed without city approval.

The deal between Bayside Marketplace and the company behind the wheel, Sky Views of America, calls for split revenue, lawyers for Bayside had said. The attorneys argued that what the commissioners were asking for could doom the project.

Mr. Carollo responded that if the deal falls through, the city could offer to let Sky Views come to Bayfront Park next door at a better rate than Bayside.

Bayside attorneys stressed that the attract could be a boon for business in Bayside, which in turn would mean more revenue for the city.

“These kinds of things that we’re proposing today, we’re doing because retail has changed and you need to have draws to a place like Bayside. Otherwise, you’re going to have a failure in your hand,” attorney Wayne Pathman, representing Bayside, had said Sept. 26.

Commissioners were dissatisfied with the city administration not offering revenue projections for the attraction, with Chairman Ken Russell saying it could have been critical to having enough favorable votes from the commission.

Installing the Ferris wheel, referred to as an observation wheel by Sky Views, before Super Bowl LIV in February has been a goal of the applicants. The attraction was going to be incorporated in next year’s Super Bowl festivities in Downtown Miami.

The proposed attraction is to feature gondolas, or enclosed capsules, that could each seat eight passengers, for a total of 336 passengers. Rides are to last 12 to 15 minutes.

The city’s Planning, Zoning and Appeals Board had recommended the observation wheel for approval.