Advertisement
The Newspaper for the Future of Miami
Connect with us:
Front Page » Real Estate » Retail, condos, apartments advance at Miami Worldcenter 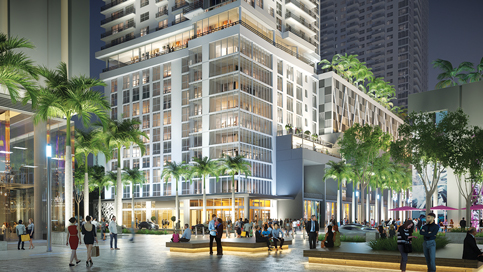 Miami Worldcenter, the mega-project in the Park West area, is shaping up nicely, said Nitin Motwani, one of the principals.

There have been 250 closings at Paramount, Miami Worldcenter’s landmark 60-story glass-fronted condominium. “It’s going great,” with 90% of the building’s 569 units sold, Mr. Motwani said. Prices range from $750,000 to $10 million. “People are starting to move in, and it’s just a matter of time until the building is filled.”

“We have delivered 150,000 square feet of retail and have another 50,000 under construction,” Mr. Motwani said. National and local high-street retail stores are expected to move in, along with a variety of food, beverage, and entertainment uses, which he said he was not at liberty to divulge.

Also under the Miami Worldcenter umbrella are:

■Luma, a 431-unit luxury apartment building by Zom Living, where unit sizes will run from 556 to 1,808 square feet and numerous desirable amenities will be available.

■Block D East, a multi-use space that spans 50,000 square feet and includes a plaza and a walkway to Paramount, as well as 1,000 parking spaces.

■Citizen M Miami, a 351-room boutique hotel with no parking, which is projected to break ground by the end of this year.

The kinds of people who are moving into Miami Worldcenter are a diverse mix, both by nationality and by life stage, Mr. Motwani said.

“If you look at Paramount, there are buyers from 56 countries,” he said. “China was a big part of the story, as were India and Turkey. That surprised us, but these are sophisticated buyers who come from markets where large, mixed-use developments are not uncommon. We’ve opened up this market in Miami to new countries. We also see domestic buyers coming in heavily.”

That same diverse dynamic is in place in the first rental component, he said. “At Caoba, we expected young urban millennials, and we’re getting them. We also get a lot of people who work or study at the UM medical campus.

“But we were surprised to see the number of empty nesters and semi-retired renters. When we asked them why – because we’re always trying to learn – they said they wanted to be near arts and culture, near educational institutions (Miami Dade College offers so many programs), near the restaurants,” he said.

There are also parents with young children, who would traditionally choose the suburbs. “We have three pools and a soccer field, so it’s very kid-friendly. We are seeing more families than we expected, and education is a big factor. We’ll continue to see that growth as more educational facilities become available.”

Getting the massive project – on the drawing boards for at least five years – off the ground “has been a process,” Mr. Motwani said. “But we believed in Miami, so we stayed with it.”

One Response to Retail, condos, apartments advance at Miami Worldcenter