Advertisement
The Newspaper for the Future of Miami
Connect with us:
Front Page » Transportation » Multi-million deal would run Virgin Trains into Port of Miami

Multi-million deal would run Virgin Trains into Port of Miami 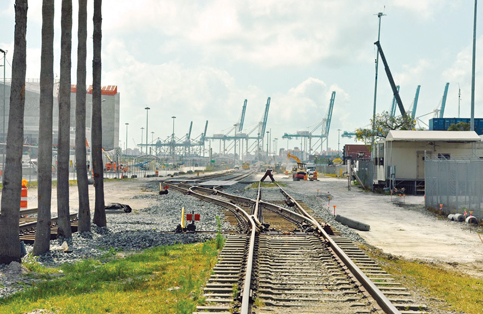 Less than a week after they OK’d spending up to $76.7 million in taxpayer dollars on a new Virgin Trains station in Aventura, Miami-Dade lawmakers today (10/17) are to look at another multimillion-dollar deal to extend the company’s services to PortMiami.

County commissioners are to consider a memorandum of understanding (MOU) with Virgin summarizing the terms of an estimated $53.3 million project to design, build and operate a 20,500-square-foot station on at least one acre of seaport land.

In approving the item sponsored by Rebeca Sosa by a final vote Nov. 19, commissioners would also authorize Mayor Carlos Giménez’s office negotiate those terms with Virgin Trains, which still operates as Brightline.

Costs for the project include $15.4 million for station infrastructure, $35 million for a 240-passenger train set and other overruns to be borne by Virgin.

The MOU includes a $5.2 million investment by the county, for which it would be repaid through a $2 fee per departing train passenger, the memo says.

Over the deal’s initial 30-year term, the county expects to receive $49 million in rent and passenger fees.

The deal includes provisions for a 20-year renewal at Virgin’s option, plus two additional 20-year renewals contingent on a mutual agreement between the county and the company.

If all three renewals are tapped for a maximum 90-year term, the county expects to rake in $490 million, a memo from Deputy Mayor Jack Osterholt says.

Virgin – which would pay all operations and maintenance costs for the station, trains and customer services, including passenger shuttles to cruise terminals – plans to run two roundtrip trains daily for the first two years of operation and at least double that thereafter.

For the first 10 years of the agreement, Virgin would agree to not operate a train station at any other seaport. The company would have to improve the tracks as part of the development, the memo says; however, it would still have to share them with other rail operators “actual and future.”

By the end of the fifth full year of operation, Virgin would pay the county $7 million altogether, with the company agreeing to bear any shortfalls in that amount.

The deal also includes a contingency for Virgin if Miami-Dade builds an intermodal terminal at the port or space there becomes available “that would serve as a more optimal location for the passenger train station.”

Were that to happen, the MOU says, the company and county would “cooperate on determining whether and on what terms” Virgin may either relocate to the new terminal or use the space to provide services.

In February, the Miami-Dade County Commission approved a directive, also sponsored by Rebeca Sosa, directing the mayor’s office to examine the port extension, which would use existing rail lines.

This next step in that process comes six days after the board approved a plan to buy a three-acre plot near Aventura Mall and build a Virgin Trains station using up to $76.7 million in taxpayer funds.

Once operational, the stations in Aventura and PortMiami will be Virgin’s northernmost and southernmost stations in Miami-Dade.

Service between Virgin’s downtown MiamiCentral station and Aventura is expected to begin as early as October 2020, though the company isn’t contractually obligated to operate the route until roughly two years later.

The new line is intended as Miami-Dade’s solution for the Northeast Corridor of its long-term SMART Plan initiative to upgrade six key corridors across the county with new mass transit solutions.

In approving the Aventura station Oct. 11, the county commission chose a solution for only the second of those six corridors – the other being bus express rapid transit on the South Dade Transitway – since adopting the SMART Plan in early 2016 alongside municipal leaders and a school board member.

“We have been talking for years,” Ms. Sosa said. “It’s time for us to step up and start.”

An analysis by the Citizens’ Independent Transportation Trust – which oversees the half-percent transit surtax known as the “half-penny,” whose proceeds will fund the project – called that rate “extraordinarily high and out of reach for most commuters.”

But the trust nonetheless endorsed the project, which at first failed to pass by a required two-thirds vote until Florida East Coast Industries SVP Jose Gonzalez agreed to a stipulation that any residential development on the property would be for workforce housing.

That prompted Mr. Monestime to reverse his opposition. After Mr. Martinez left before the final vote, Ms. Levine Cava and Mr. Suarez were the only two left voting no.

In a statement released Monday, Ms. Levine Cava called the proposal “hastily put together,” leaving “more questions than answers” on how it will improve mobility and reduce roadway congestion.

“The high ticket price … leaves too many priced out from using this option – counter to the mission of connecting our residents to accessible transit,” she said.

Further details remain pending, including station provisions to accommodate Tri-Rail, for which Virgin agreed to include designs for future upgrades, and a potential county subsidy to lower fares that Mr. Giménez said would be negotiated.

“If you allow the perfect to be the enemy of the good, we’ll never do anything in this county,” he said.

But despite rebranding its downtown Miami hub in April, the company in its official communications still goes by its original moniker, with “soon to be Virgin Trains” after.

Since starting service in January 2018, the company backed by New York-based Fortress Investment Group has built three stations, added five train sets and made broad infrastructure investments in Florida totaling $2 billion, according to the company’s prospectus.

At a public meeting Monday in Jupiter, the company shared details of the second phase of a multibillion-dollar project connecting its West Palm Beach station to Orlando International Airport, which may include stops in Fort Pierce and Stuart.

Phase II, which includes laying more than 170 miles of new tracks, according to the company’s website, is expected to take about three years.