Advertisement
The Newspaper for the Future of Miami
Connect with us:
Front Page » Top Stories » Miami-Dade may target micro-housing to beat rising costs 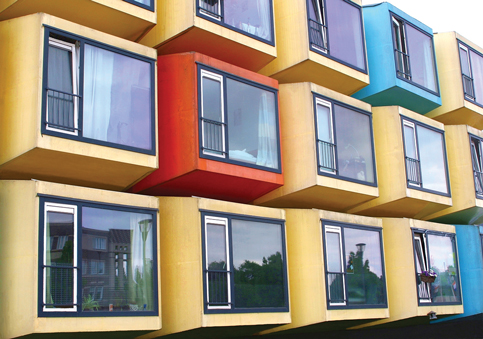 Miami-Dade lawmakers may soon tell Mayor Carlos Giménez’s administration to take another look at micro-housing – including micro-apartments, tiny homes and accessory dwelling units – as a way to address rising housing costs throughout the county.

Micro-homes come in various forms, from micro-units in multi-family buildings to standalone single-family dwellings built on foundations or trailer platforms.

They comprise self-contained living spaces, complete with sleeping and sitting areas, a kitchen and a bathroom. And while no unanimous definition exists for what precisely constitutes a micro-home, the general range of area space is between 100 and 400 square feet.

A directive that was to go before the Housing, Social Services and Economic Development Committee Oct. 16 would, if approved, direct the county administration to “explore opportunities to develop or encourage development of county-owned properties with affordable micro-housing.”

The item, sponsored by Commissioner Barbara Jordan, also calls for the mayor to report within six months identifying county properties where micro-housing would be suitable, how close to transit they are, as well as development recommendations and an action plan that includes when and how micro-housing should be mixed with other unit types and whom it would best serve.

“We have to explore every opportunity to try and get affordable housing in Miami-Dade County,” Ms. Jordan told Miami Today. “This is another vehicle to do that.”

Ms. Jordan’s legislation comes more than a year after commissioners authorized a prior directive, which she also sponsored, that ordered the mayor to “take all necessary steps to implement the development of micro-houses” and provide a related report.

The result was the 10-page “Report on the Feasibility of Developing Micro Housing in Miami-Dade County,” prepared by the county’s Department of Regulatory and Economic Resources and delivered to commissioners Nov. 1, 2018.

■Amending the county’s comprehensive development master plan to allow for additional density so micro-units could be built within a half-mile of rapid transit stations and certain universities.

■Requiring 12.5% of units to be priced affordably for those earning up to 80% of the area median income.

■Determining the location and number of properties with detached accessory dwelling units – small homes on the same lot, and considered ancillary to, a primary residence that are leasable year-round to people unrelated to the owners of the primary structure – and using that information to determine if they should be allowed in additional zoning districts.

Ms. Jordan said she’s visited a micro-housing community in North Carolina and watched several episodes of the YouTube series, “Living Big in a Tiny House.” The things being done with such little space, she said, are incredible.

“We have to get used to adapting our thought process,” she said. “You just decide what’s more important, [having a lot of] things or convenience and practicality.”

Median single-family home prices in Miami-Dade skyrocketed 83% between 2010 and 2017, according to the Miami Realtors Association. Inflation-adjusted annual wages here dipped 7.1% on average over the same period, data from the US Bureau of Labor Statistics shows.

That growing gap between wages and residence costs is reflected in the county’s housing affordability index.

Per the county report, more than 65% of renter households and 44% of owner-occupied homes with mortgages are cost-burdened, meaning they spend more than 30% of their collective incomes on housing costs.

Unfortunately, many across the country, and some here in Miami-Dade, are learning that a smaller floor plan might not translate into a cheaper home.

A comparison of prices from 25 tiny-house construction companies in 13 states compiled by home-living site The Spruce listed the median cost in the US in 2017 as about $60,000. Assuming the maximum area of 400 square feet, that’s $150 per square foot, roughly in keeping with the median of $155 per square foot nationwide. However, the square footage one gets for that amount of money is usually about half that.

Such was the case with a pilot project to build a 480-square-foot shipping container home in South Miami, which county commissioners OK’d in December 2018 for the purpose of demonstrating the feasibility of a county-wide container home program.

The project was to take place on an irregular parcel and be overseen by the Miami Realtors Association, which was tasked with selling the home at a cost no greater than $180,000, or $375 per square foot.

Asked by Commissioner Daniella Levine Cava if it was possible to sell the home for $96,000 –$200 per square foot – Daniella Blake, senior VP of government affairs and housing for the association said no because it wouldn’t be duplicable.

Last week, Ms. Jordan said that while she’d voted in favor of that project at the time, she’d been “thrown off” by its cost. For a micro-housing project to succeed on a macro-level, she said, costs would need to be kept low.

“There are different ways to do it,” she said. “But if I have to pay the same price for a micro-home as I would a regular home, it doesn’t make sense.”