Advertisement
The Newspaper for the Future of Miami
Connect with us:
Front Page » Arts & Culture » Pérez Art Museum Miami hails its educational efforts 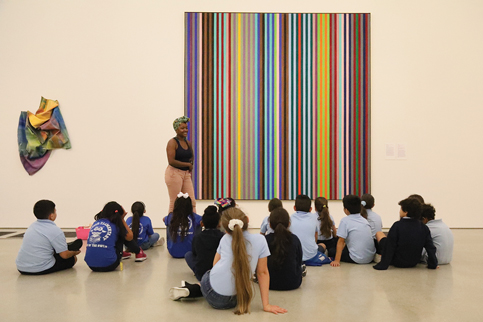 The museum on Oct. 4 commemorated serving more than 215,000 children through its educational programs since its doors opened in December 2013, a release from New York-based art consultancy firm Cultural Counsel said.

A longtime partner of PAMM and its prior iteration, Miami Art Museum, Southside has sent students to the museum each school year through a program funded by the Knight Foundation, which also funds much of the museum’s programming.

PAMM on Oct. 23 will host its 12th annual corporate luncheon, presented by Constellation Culinary Group, with all proceeds going to the museum’s art and education outreach programs.

This year’s luncheon will feature a futuristic theme highlighting “the convergence of art and technology,” a museum article says.

Outside of Miami-Dade County Public Schools, PAMM – named for billionaire Miami developer, philanthropist and art collector Jorge M. Pérez – is the largest provider of art education in the county, reaching more than 47,000 children each year, according to the event page.

The museum, founded as the Center for the Fine Arts in 1984, is home to one of the largest collections of contemporary Cuban art in the world.

Its building at 1103 Biscayne Boulevard, designed by Herzog & de Meuron, contains about 2,000 pieces of artwork, mostly from 20th and 21st century artists from the Americas, Western Europe and Africa.

■Made at PAMM, a weekly art-making program centered on the museum’s current exhibitions.

■Brick x Brick, a program for at-risk teens that takes place at community centers in underserved areas throughout the county and focuses on architecture, design and community planning.

■PAMM in the Neighborhood, a summer camp program for underserved youth.

“I receive a wealth of personal fulfillment from PAMM’s mission of supporting arts and education in the community,” Ms. Freeman said in an interview published on PAMMPortraits.org. “It’s important for me to be connected to the cultural arts community where I live.”