Advertisement
The Newspaper for the Future of Miami
Connect with us:
Front Page » Communities » Miami to vote on conservancy to run Maurice Ferré park

Miami to vote on conservancy to run Maurice Ferré park 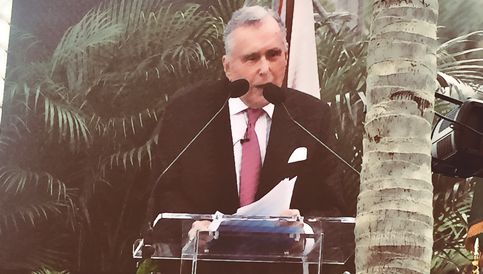 After the passing of former Mayor Maurice Ferré last month, the Miami City Commission will vote on an agreement with a new not-for-profit conservancy for the management of a waterfront park renamed in his honor.

The legislation that would shift the management of Maurice A. Ferré Park to the new conservancy is sponsored by Mayor Francis Suarez and Commissioners Wifredo “Willy” Gort, Ken Russell, Manolo Reyes and Keon Hardemon and featured on today’s (10/10) agenda for first reading.

According to the proposed agreement, The Maurice A. Ferré Park Conservancy would have the “exclusive authority to direct, operate, manage, maintain, program and develop all aspects of the City-owned property known as Maurice A. Ferré Park, exclusive of the Leasehold Area, for the purposes of ensuring maximum community utilization and enjoyment, fundraising for its operations and promoting the Park as a signature civic and cultural space.”

On 90% of days, the park at 1075 Biscayne Blvd. would be reserved for free public access and use.

While there have been talks of creating a conservancy to look after the park for the better part of the decade, the idea has never come to fruition. The park is currently overseen by the Bayfront Park Management Trust, chaired by Joe Carollo, the only city commissioner who is not a sponsor of the legislation. During the transition, Bayfront Park Management Trust would continue to manage the park’s daily operations and receive funding for the operations.

The conservancy would be tasked with creating a capital improvement plan and operating budget for the park, as well as an endowment fund.

Sonia Succar Ferré Rodríguez, a granddaughter of the former mayor, spoke on behalf of the conservancy at a city Sea Level Rise Committee meeting this week, saying the agreement would help deter development of the park’s land and help bring more funding for the park.

“We felt it was incredibly important to have an entity, a body, helping to stay focused on the protection of the park,” she said.

The committee will have to address the matter again after Oct. 12, when it assumes its new role as the Climate Resilience Committee after consolidating with the Waterfront Advisory Board.

The planned conservancy would not have any responsibility for maintaining or funding the approximately 8-acre leased site within the park consisting of the Pérez Art Museum Miami, Frost Science Museum, Knight Plaza and the Museum Parking Garage.

Back in December, the city commission unanimously approved changing the name from Museum Park to Maurice A. Ferré Park, in honor of the city’s first Hispanic mayor who has been often been called the father of modern Miami. Previously, the park had been named Bicentennial Park.

The park is south of the Federal East Coast Slip and AmericanAirlines Arena, with the Pérez and Frost museums to its north. East of the park is Biscayne Bay and to the west is Biscayne Boulevard.