Advertisement
The Newspaper for the Future of Miami
Connect with us:
Front Page » Profile » Jaffus Hardrick: Aims to triple enrollment of Florida Memorial University 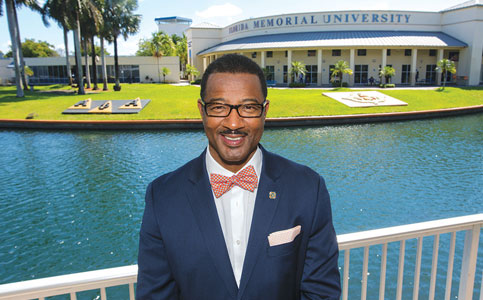 Dr. Jaffus Hardrick knows there will be challenges in bringing Florida Memorial University (FMU) to a new level. He looks at those challenges as opportunities to grow and improve.

Part of his ambitious mission as president of South Florida’s only historically black college or university is to instill that outlook in the school’s faculty and students through leadership and vision.

For more than 20 years, he’s proven himself effective in improving administrative operations and building support systems for success.

“The provost at the time saw the transformation at the university by way of policies, procedures, operational excellence and leveraging technology, moving us from manual processes to being completely automated,” he said.

Florida International University also took note, recruiting him in 2008 to oversee its human resources department as its vice president. His aptitude and drive again earned him a second role, vice provost for student access and success.

His responsibilities in that position revolved around promoting equality for students who lacked the same opportunities as others and ensuring the school not only retained but developed and elevated those students.

Many were like him – first-generation college students who were underrepresented in higher education. Through programs he created, he helped to better include and support those students and, most importantly, maximize their chance at academic success.

Last year, a new opportunity once again came knocking; and once more, he answered.

“As a result of my work and the success I was having in the community, Florida Memorial University asked if I would consider serving as president here, and I just fell in love with the place,” he said. “It’s truly a hidden gem – one of these institutions that’s been tucked in the corner here in Miami Gardens. Not many people know about it, but it’s rich with opportunities.”

Dr. Hardrick started as FMU’s interim president in July 2018. In March, the school announced he’d be staying officially as its 14th president.

The change didn’t affect him much, he said, as he’d already committed to the job and was treating the responsibility as permanent. For the school, however, it marked a new era.

“It solidified that we have a permanent leader, and this university has gone through so many,” he said. “That created a great deal of instability and uncertainty, never allowing this university to develop strong, lasting partnerships. I’ve only worked for two [prior] universities because I believe you have to be stable to create something lasting and sustainable – the things we’re doing here now.”

Dr. Hardrick sat down with reporter Jesse Scheckner. The interview, recorded by Jahmoukie Dayle, can be viewed below.