Advertisement
The Newspaper for the Future of Miami
Connect with us:
Front Page » Business & Finance » Miami International Boat Show may look at fall dates 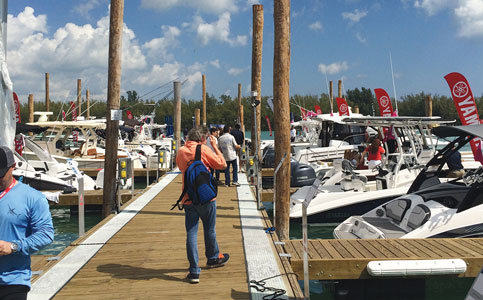 Some of the people supporting restoration of Miami Marine Stadium fear the millions of dollars going into the rebuild may be wasted if the Miami International Boat Show hogs the property in the peak tourist season.

The boat show is held in mid-February on Virginia Key, but what if it were staged in the fall?

That idea was floated at the Sept. 24 meeting of the Virginia Key Advisory Board by member Esther Alonso-Luft.

The man who runs the boat show said he’s open to the possibility.

Changing the scheduled annual show came up during the board’s questioning of Larry Berryman, director of the Miami International Boat Show, hosted for decades by the National Marine Manufacturers Association (NMMA).

Mr. Berryman had narrated a slide show boasting of the success of the boat show and the tremendous financial impact it has on the city and South Florida.

He also expressed the association’s desire for long-term use of the city-owned island property. City officials said they are negotiating a new license with NMMA for continued use of the site.

Some board members have lamented that the boat show shuts down public access to the city-owned site from mid-January through February, and limits access to the public property beyond the 40-day closure.

The city owns much of the island, along with the waterfront stadium, idled since 1992’s Hurricane Andrew.

The city has numerous projects underway on the island that are expected to impact each other, from restoration of the stadium to multi-million dollar improvements to the flex park acreage that hugs the stadium.

The boat show has used the flex park area and the historic basin since its 2016 event.

She said business at area hotels slows in September and October.

“Having you here in the fall would bring a positive impact … I don’t know how this would work with your members’ schedules (but) I would love for you to consider the possibility of a date change, along with minimizing the time you use to set up and break down (the show),” said Ms. Alonso-Luft.

Outdoor events in the dead of summer in Miami are sparse, as heat, humidity and rain turn the region into a tropical sauna.

The restored stadium will need to generate revenue, all agree, and some see the disadvantage of the stadium being unable to host a variety of events and shows in January and February.

“The solution,” posed Ms. Alonso-Luft, “is perhaps a fall date.”

Mr. Berryman immediately responded, saying they “wouldn’t say no to the possibility.”

He said a renovated marine stadium would benefit the boat show.

“We are certainly not standing in the way. I know how important all this is,” Mr. Berryman told the board.

For the last several years, the association has paid the city a $1.3 million annual license fee for use of the site, and chips in an additional $500,000 a year toward police and fire services.

Board member Lynn Lewis questioned him on the financial aspects of hosting the show.

Mr. Berryman stressed the NMMA is a non-profit association.

“We invest heavily for the entire marine industry, to make it a world-class event – even at a loss,” he told the board.

“Why do you do it if it’s a consistent loss?” Ms. Lewis asked.

“It is a major event that we continue to improve,” Mr. Berryman said. “We’re committed to South Florida and we’re committed to this site. We’re not here to make a quick buck and leave. We found a beautiful home, one that works for everybody.”

Board Chairman Joe Rasco told Mr. Berryman he doesn’t believe anyone on the board wants the boat show to leave the city, “so let’s take that off the table and work together.”

“Conversation needs to continue … let’s see how we can come to a happy medium,” said Mr. Rasco.

The fate of the boat show and the stadium were top agenda items for the board in July.

The board was told the city is in the midst of negotiating a new revocable license with the boat show producers, and city officials want the association to reduce its footprint at the island property and shorten the time it holds control of the site.

He said the show results in $854 million in economic impact annually for Florida. Of that, Miami-Dade businesses see $49 million in revenue and the show directly supports 5,700 full-time jobs.