Advertisement
The Newspaper for the Future of Miami
Connect with us:
Front Page » Top Stories » Miami gives scooters two more months in trial 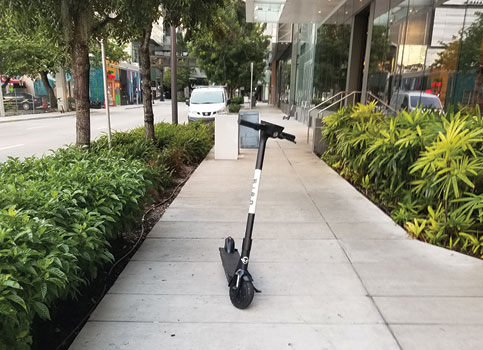 Scooters can remain on city of Miami at least a bit longer.

With the first six months of a pilot program wrapped up, the Miami City Commission last week voted to renew the scooter program two more months. The second iteration has added measures to address safety concerns, as emphasized by Chairman Ken Russell, whose district will continue being the sole area of scooter operation in the city,

He made floor amendments during the meeting, allowing scooter vendors to maintain their fleet size, protecting the Deco Bicycle dock stations from encroachment by scooters, and ordering the administration to run two spot checks a month to verify the data.

“This one is the most important one to me to stop unauthorized, underage riding,” Mr. Russell said as he explained an amendment. “Every company now will have to scan a driver’s license to start the app. If anyone is found to be using the app that is not that a registered user, the companies must charge the user $100.”

Stripped from the pilot after objections from Wifredo “Willy” Gort was a proposed ancillary program that would have allowed motorized bicycles in the district.

While voting went as expected, with Mr. Russell, Mr. Gort and Keon Hardemon voting for the pilot, Mr. Hardemon opposed a first motion that would have extended the program six months. He said he’d like the commission to discuss the pilot again to decide whether to request proposals or to continue having scooters in the city on a pilot basis.

In addition to the amendments proposed by Mr. Russell, the pilot will now call for vendors to put identification numbers on scooters’ poles. The numbers would help in reporting of scooter misuse.

While the second iteration will still allow scooter riders on streets and sidewalks, speed will be limited to 7 miles per hour on sidewalks compared to 15 in bike lanes and streets. Users will also have to photograph their scooters after each ride.

The program will still be restricted to the city’s second district – Edgewater, Downtown Miami, Brickell and Coconut Grove.