Advertisement
The Newspaper for the Future of Miami
Connect with us:
Front Page » Communities » Coral Gables ban on Styrofoam hinges on Supreme 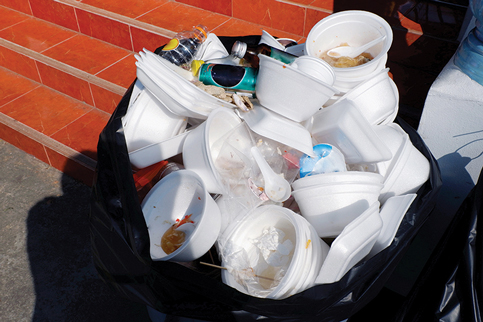 In its ongoing fight to uphold its ban on Styrofoam and single-use plastic bags, Coral Gables will now take its case directly to the Florida Supreme Court.

Parties wishing to appeal a decision from a lower court can ask that court to certify the appeal to the Supreme Court but can also apply on their own, she explained. Because the Third District Court declined, the city will follow the latter path.

The Supreme Court doesn’t have to take the case, Ms. Ramos has said, and she re-iterated that last week. If the court declines to hear it, the city will seek legislative relief or will try to find an ally in Gov. Ron DeSantis, who vetoed a law restricting the right of cities to institute bans on plastic straws. The governor has also expressed an interest in environmental issues.

The Coral Gables City Commission voted unanimously in August to appeal a decision by the Third District Court of Appeal slapping down the city’s ban on Styrofoam and single-use plastics in retail establishments.

“This is a big issue, but the bigger issue is the assault on our home rule charter,” Mayor Raul Valdes-Fauli said at the time.

In March 2016, the Florida Legislature passed a law prohibiting any municipality from regulating Styrofoam or other packaging materials, including plastic bags, if its ordinance was passed after Jan. 1, 2016. Miami Beach and several other cities that passed bans earlier were carved out of the legislation. Coral Gables passed its ban in early 2016.

The Florida Retail Foundation sued to challenge the ban, which was upheld by a local court but struck down by the Third District Court on appeal.

Corali Lopez-Castro of the Kozyak Tropin & Throckmorton firm, who represented the city in the Third District Court of Appeal, will handle the Supreme Court appeal if the high court agrees to take the case, Ms. Ramos has said.

If the high court declines to hear the case, or the rules against the city on appeal, “It would end there. It would essentially be over,” she said.

The commission also voted to stay enforcement of the Styrofoam and plastic bag ban pending the outcome of an appeal. But Ms. Ramos and others have said they hope businesses would continue the eco-friendly trend.

“We have a very robust volunteer program in place for businesses that have sustainable initiatives in place,” she said then. “People have responded very positively.”

6 Responses to Coral Gables ban on Styrofoam hinges on Supreme