Advertisement
The Newspaper for the Future of Miami
Connect with us:
Front Page » Arts & Culture » Climate cloud may hang over Wynwood

Climate cloud may hang over Wynwood 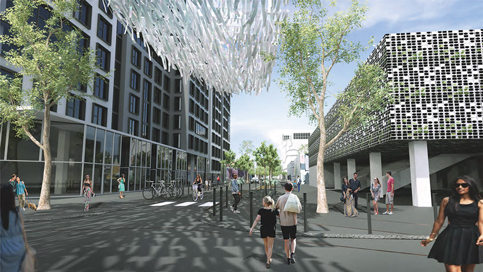 Plans for a woonerf on Northwest Third Avenue in Wynwood have evolved to include gateway art, possibly in the form of a “climate cloud” that would be suspended above Northwest 29th Street, and a meandering layout intended to slow traffic down.

Jennifer Bolstad and Walter Meyer, co-founders of Local Office, the Brooklyn-based firm that designed the streetscapes for Miracle Mile and Giralda Plaza in Coral Gables, presented their latest design iteration to directors of the Wynwood Business Improvement District (BID) Sept. 11.

The plan is to close one lane of traffic and make the curb-less street one-way traveling south from Northwest 25th to 29th streets. Cars and pedestrians would share the space, which would be outfitted with street furniture, native plants and trees, lighting fixtures, and other amenities.

“The design shouldn’t compete with everything that’s going on in Wynwood,” Ms. Bolstad said. “It’s not floral; it’s much more gritty. We wanted to create a place that’s filled with life, and that serves as a frame for the imagery that’s already here.”

The asphalt sidewalks will be a mixture of light and dark greys, along with other neutral tones, which don’t get as hot as darker asphalt, Mr. Meyer explained. “It’s really an outdoor living room, similar to Giralda Plaza, which is the closest thing to a woonerf in Miami.”

“Thank you for your patience and your willingness to evolve,” said Albert Garcia, BID vice chair and managing principal of Wynwood Ventures. Local Office redrew its plans in April after some stakeholders said the design was too suburban and out of touch with Wynwood’s urban, art-forward vibe.

“I love it,” said BID board member David Charette, founding principal of Britto Charette. “I’d like to see Wynwood greening up, have a riot of trees.”

He said he’s concerned about pedestrians, but Mr. Meyer explained the design is meant to curb traffic.

“Wynwood could be the first place to implement pedestrian safety measures, and that could spread to the rest of Miami,” Mr. Charette said.

“It will be great to have art at the entrance to Wynwood,” said BID board member Jon Paul Perez, vice president of Related Group.

Mr. Garcia said he will meet with Local Office principals before they present the plan to City of Miami officials, which they anticipate will be in about a month.

3 Responses to Climate cloud may hang over Wynwood