Advertisement
The Newspaper for the Future of Miami
Connect with us:
Front Page » Profile » Symeria Hudson: Chapman Partnership CEO aims to limit homelessness 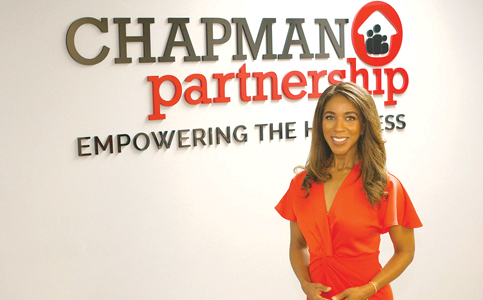 Before moving to Miami two years ago, Chapman Partnership President and CEO Symeria Hudson spent the better part of two decades in the healthcare and medical technology industries, driving the portfolios and strategic marketing efforts of billion-dollar corporations.

During her last role in London, where she served as president of global franchises and innovation for international medical products and technologies company Convatec, she realized she needed a change of pace and scenery.

“I was part of the executive team that led the largest IPO in Europe’s history for a listed healthcare company in 2016. I was so busy,” she said. “My husband and I decided that coming back to the US was the best thing for our family.”

They decided to move to Miami, and after she took a year off to recharge and reflect on what to do with the next chapter of her life, she heard about Chapman Partnership.

Incorporated in 1993 as the Community Partnership for the Homeless – and renamed in 2011 in honor of its late founder, preeminent local civic leader Alvah Chapman – Chapman Partnership is the private sector partner of the Miami-Dade Homeless Trust.

The nonprofit, which operates two facilities in Miami and Homestead comprising 800 beds, provides its residents with childcare, mental and physical health care, job training and placement, housing placement and legal aid, among other services.

Learning about Chapman Partnership and what it offers the community, Ms. Hudson said, evoked the memory of her uncle, who passed away while living on the streets.

“He didn’t have access to the resources we have here,” she said.

After researching the organization – “I’m big on due diligence,” she said – she applied for the responsibility of steering its future, was interviewed by its board of directors and selection committee, and got the job.

“I want to give back to the community and the people we serve,” she said. “It’s a personal mission.”

Ms. Hudson sat down with reporter Jesse Scheckner. The interview, recorded by Jahmoukie Dayle, can be viewed below.