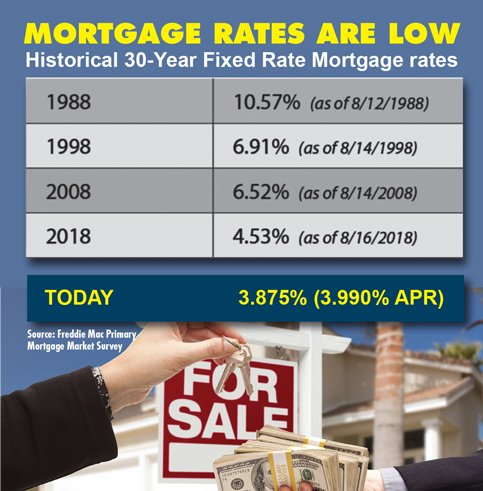 Last week, the Federal Reserve Bank lowered the rate by one-quarter of a percentage point, from 2% to 1.75%, and announced that another rate cut may be in the offing by year’s end.

If the rate goes up 1%, it reduces by about 11% the amount a buyer can borrow and still have the same payment, he said.

“You would apply the same logic when the rate goes down,” said Eric Spottswood, regional manager for the Southeast at Prosperity Home Mortgage, Berkshire Hathaway HomeServices’ mortgage arm. “It’s very exciting to us in the market.”

Lending got very tight after the crash of 2008, but recent loan reforms have increased access to mortgages, he said. There are worries that this will lead to another crash, but Mr. Spottswood said those fears are unfounded.

“What I remind people is that now we have layered risk,” he said. “Before the crisis, people with bad credit were not putting much money down when they purchased. Now once again we have the no-money-down loan, which improves access. But the guidelines are much more stringent.”

People who get these loans must have very good credit or other assets they can show as collateral to balance out the risk of their minimal – or nonexistent – down payment, he said. “We’re offsetting risk and using more responsible lending practices. There are guardrails in place.”

Banking regulators have also raised the limit for a conforming loan to $484,350, which means federal programs including Fannie Mae and Freddie Mac can participate, he said. “This gives more flexibility and makes mortgages easier to access,” Mr. Spottswood said.

Mortgage access is important, he added, especially in the lower price tiers. According to the Multiple Listing Service figures for Miami-Dade County, 84% of buyers of single-family homes that sold for less that $1 million in June, July and August obtained mortgages. But only 56% of buyers at the $1 million-and-higher price level for single-family homes got mortgages.

“When we did not have the programs we have today, it was much more difficult for buyers to obtain a 30-year mortgage,” Mr. Shuffield said. “We’ve returned to a totally normal market.”

And one that is more inviting than decades ago. According to Freddie Mac statistics, interest rates have fallen from a high of 10.57% in 1988 to 3.88% today.

“Rates still are very low, and we’ve seen a lot of activity, both in purchasing and refinancing,” said J.C. de Ona, Centennial Bank president for Miami-Dade County. “We don’t see that changing in the short term.”

Loans are becoming easier to obtain for borrowers who are “a little bit outside the box, a little outside the parameters,” he said.

These might include young people who earn substantial incomes but have student loans, and others who don’t want to tie up their money with a large down payment, he said. “We’re seeing the return of 85%, 95%, and 100% loans,” he said. “Homes have gotten so expensive. But you’ve got to hit all cylinders to get approved.”

That might mean being able to show assets that could guarantee at least six month of mortgage payments in the event of an emergency or job loss, he explained. But some loan guidelines now allow the assets to be in the name of a business, rather than in a personal account.

“We are seeing good activity,” Mr. de Ona said, “and a lot of first-time homebuyers entering the market.”

“Rates are the lowest they’ve been in three years,” said Doug Leever, mortgage sales manager at Tropical Financial Credit Union. “We’ve seen a very considerable increase in purchase and refinance activity since March. All of the economists have been saying rates are going to go up, but the opposite has happened. It’s awesome.”

Tropical Financial Credit Union, founded in 1935, is one of the state’s oldest credit unions and has $740 million in assets. “The best-kept secret is that we do mortgages,” Mr. Leever said.

The credit union also makes portfolio loans for condos that don’t have enough reserves, home equity loans, and other types of loans.

“This year, we’re in a tremendous environment, and the prime might go down again,” he said. “People might be holding off because of that, but it’s a great time to find the right lender. If you want to purchase, if you want to refinance, the time to do it is now.”