Advertisement
The Newspaper for the Future of Miami
Connect with us:
Front Page » Communities » Eye-opening look at new vistas in 33 acres under I-395 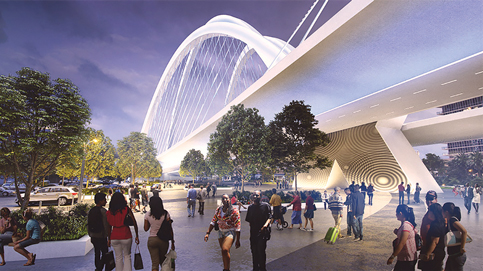 Downtown’s overseers just got an eye-opening look at what the Underdeck – the 33 acres beneath a redesigned I-395 – could be like when today’s barriers disappear and events and amenities can flood the area with pedestrians.

“That place comes back alive again and transforms multiple neighborhoods,” Steve Williamson, director of Miami’s Department of Capital Improvements, told directors of Miami’s Downtown Development Authority (DDA) on Friday. “We quartered our city in the 1970s” when the connection of I-95 and I-395 took a slice out of Overtown and the Omni area. “It’s been a blight far too long.”

Plans for the rebuilt I-395 – with its much-anticipated Signature Bridge – call for the existing 800 support columns to become 200, opening up the space for cafes, event space, performance venues, nature trails and room for people to congregate.

The earthen berms, 600-foot wall, and chain-link fence that now dominate the space will be gone, allowing light to flood the area. While the Florida Department of Transportation (FDOT) will build the park, Miami is to design and operate it.

“This has so many parallels to Biscayne Green,” said Ken Russell, authority chair and Miami commissioner, referring to the authority’s plan to reduce lanes on Biscayne Boulevard and create a “grand promenade” that would become a gathering space. “Where I see the DDA getting involved is in the activations; if nothing is there, no people will come. What FDOT would create is a vanilla park, and the CRAs’ [Community Redevelopment Agencies’] mission is eliminate slum and blight. Neither are involved in the activations.”

And, he said, “I don’t see an organic connection to the museums and Biscayne Bay.”

There are plans to build a gradually sloping walkway over the Florida East Coast Railway tracks along the property’s southern boundary, said Colin Worth, Underdeck project manager for the city. That walkway is designed to tie the Underdeck to the Frost Science Museum and Pérez Art Museum Miami.

The linear connection to the Underdeck from Biscayne Boulevard will have the ability to draw cruise passengers from PortMiami and people from other areas of Miami, he added.

“Could we have a short workshop for the board?” asked authority member Gary Ressler, a principal of the Tilia family of companies, to the approval of the group.

“The board wants a deeper dive,” Mr. Russell said. It was agreed there would be a workshop.

The city is to present its first set of plans to the state transportation department next month, Mr. Williamson said, “and then the real work begins. In November and December, we’ll have much more detail.”

“The city is so divided, economically and racially,” said board member Philippe Houdard, founding partner of Pipeline Workspaces and Skybank Financial. “This has an opportunity to serve as a nexus to think about integrating the communities.”

The downtown authority voted in December to commit $50,000 to the Underdeck’s design. The Miami Parking Authority also committed $50,000, Mr. Williamson said after the meeting. The Omni Community Redevelopment Agency agreed to contribute $150,000 to the design, and the Southeast Overtown/Park West Community Redevelopment Agency is considering doing the same.