Advertisement
The Newspaper for the Future of Miami
Connect with us:
Front Page » Government » Minus China, Miami-Dade looks to recycle its recycling

Minus China, Miami-Dade looks to recycle its recycling 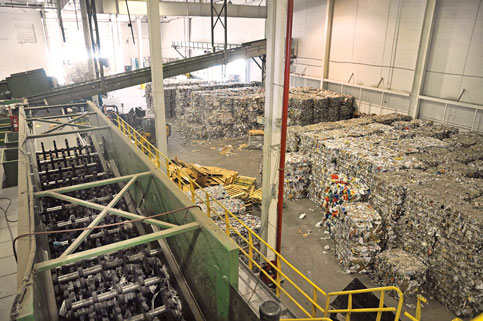 States and local governments have been scrambling to prevent a backslide on recycling since China stopped accepting scrap materials from the US nearly two years ago.

Next month, Miami-Dade lawmakers could take the first step toward a strategy that would keep the county’s recycling program from falling to the wayside a little over three years from now.

County commissioners in committee last week advance a resolution that would, if approved Oct. 3, direct Mayor Carlos Giménez’s administration to evaluate and report on the county’s future recycling options.

Miami-Dade in 2008 entered into a contract with Waste Management Inc., which operates 146 “material recovery facilities” and 16 waste-to-energy plants across the nation. According to its website, that makes it “the largest collector of recyclable materials… in the US and Canada.”

The company, headquartered in Houston, accepts at its material recycling center and transfer stations recyclable materials from the county and the county’s third-party curbside recycling collection and hauler contractors, the item sponsored by Commissioner Daniella Levine Cava says.

Single-stream recycling, which mixes all paper fiber, plastics, metals and other recyclables rather than sort them into separate commodities, does not accommodate harder-to-recycle materials like plastic bags, cups, yogurt cups, polystyrene products like egg cartons, and window and auto glass.

The contract with Waste Management expires March 20, 2023, and the county has no extension or replacement plan.

Complicating matters is that China, which for more than a quarter-century has accepted hundreds of millions of tons of plastic waste yearly from the West, in January 2018 began banning imports of what it called “loathsome foreign garbage.”

In 2017, the US exported roughly 14.5 million metric tons of scrap recyclables to China. Within a year, it had dropped to 9.4 million, the Wall Street Journal reported last week.

The market impact has been drastic. The average price for stateside mixed paper – one of the major recycling grades in the market – plummeted from $67 in August 2017 to negative $2 a year later, the Journal said.

A June 2018 study published in Scientific Advances estimated that the blockade will displace 111 million metric tons of plastic by 2030.

“No one country alone has the capacity to take what China was taking,” Jenna Jambeck, associate professor of engineering at the University of Georgia and co-author of the study, told National Public Radio.

And no domestic entity or coalition of substitutes was prepared to take on the responsibility, Anne Germain, vice president of technical and regulatory affairs for the National Waste & Recycling Association, told the Journal.

While many local governments are discontinuing their recycling to avoid skyrocketing costs, some are looking to innovation – for which there is room here, the item says, pointing to the county’s 2014 Solid Waste Management Master Plan, which found that 50% of the county’s garbage stream was potentially recyclable.

As of last week, at least 10 states had passed legislation this year to bolster their recycling management systems, the Journal said, and roughly 200 bills introduced this year would, if enacted, address the issue by cutting back on single-use plastics.

Individual cities have similarly dived into the fray, including Coral Gables, which last month voted to appeal a recent Third District Court of Appeal ruling slapping down the city’s ban on Styrofoam and single-use plastics in retail establishments.

The city, one of the first in the state to enact such a ban, now hopes to take the issue up with the Florida Supreme Court.

“We’re accountable, and many other cities follow in our footsteps,” said Vice Mayor Vince Lago, who sponsored the legislation.

The county item, if approved early next month, would direct Mr. Giménez’s office to report within 180 days considering, at a minimum:

■The feasibility and cost of continuing the current recycling approach, including whether there is a market to which the county can sell its recyclable material.

■The feasibility and cost of potential innovative options for recycling other than the current approach, including evaluating the recycling success rates of other cities using different methods for solid waste management, reviewing innovative recycling technology and evaluating the potential to achieve other county resilience and sustainability goals.

■Cost and environmental repercussion comparisons for each potential option.

■Recommendations, including a timeline, for the next step the county commission should take to ensure that recycling continues uninterrupted once its contract with Waste Management Inc. expires.

4 Responses to Minus China, Miami-Dade looks to recycle its recycling