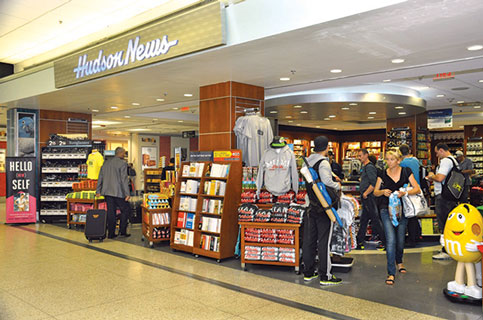 The objective of concessions at the airport, he said – beyond providing travelers at the hub food, drink and retail – should be to generate funds that help keep landing fees low, allowing the airport to remain competitive.

“It shouldn’t be tailored to those that want to make being at the airport perpetual and longstanding,” he said, referring to airport tenants that use contractual loopholes to extend their leases. “We’ve been doing concessions at the airport by campaign contributions for a long, long time, and I think we need to start drawing a line.”

Mr. Bovo’s assertion this month came over talks of a county plan to request proposals (RFP) for two firms to control concessions operations at the airport’s Central and South terminals for the next 15 years plus one five-year renewal option.

That space – which excludes duty-free stores whose leases don’t expire until 2024 – would ultimately expand to 148,000 square feet once expansions take place as part of a planned $5 billion capital improvement program at the airport, the mayor added.

The RFP is still pending. Commission Vice Chairwoman Rebeca Sosa, who chairs the committee tasked with diving into tourism-related items, said she’s working on details of the forthcoming legislation – likely due back next month – with the offices of Mr. Giménez and Aviation Director Lester Sola.

Ms. Sosa said she used to be against the idea of outsourcing oversight of airport concessions to private entities. The rationale then, she said, was simple: a publicly owned airport should be publicly operated.

“But then I started comparing the amount of time the director [has] to dedicate to the concessions plus the operations, plus cargo,” she said.

Establishing competition between two firms would be beneficial, she said, as certain companies had before banded together to act as something of a union against county control.

“You have some concessions that join forces, and they tell you to your face, ‘Nothing happens at the airport if I don’t want to.’ That [has] to stop,” she said. “When you have two or three companies competing to see who can do it better, things work out better.”

The two firms, each of which would sign a separately negotiated agreement, would be assigned “concession zones” with a mix of locations reconfigured to “promote competition, increase non-airline revenues, enhance customer satisfaction and provide opportunities for small, local and regional businesses.”

Each firm would coordinate with the airport on a series of capital improvements, including a reconfiguration and consolidation of three South Terminal security screening checkpoints that would result in a single, centrally located screening checkpoint.

The majority of stores at the airport are near the security checkpoints, Mr. Sola said, and those checkpoints’ present configuration deters visitors from wanting to remain in the area after passing through to eat, drink and peruse stores.

“People come to the airport and they want to run past TSA [Transportation Security Administration Checkpoints],” he told Miami Today.

The firms would also be put in charge of preparing competitive solicitations for their subtenants to sublease locations in their designated areas, in compliance with the county’s responsible and living wage ordinances, as well as other applicable contract, Mr. Giménez wrote.

The terms, he continued, would provide that each firm compensate the county with a minimum annual guarantee – no less than revenues received by the Aviation Department this year, between $16 million and $17 million – based on a plan prepared by the firms and approved by the county.

At least 20% of the space awarded by each firm would have to go to locally branded concession concepts, up to an equal percent should go to food and beverage locations, and 35% should be designated for retail. The remainder, the mayor wrote, should “be used as a blend of local, national, regional or international brands.”

None of the tenants would be permitted to be subsidiaries of the two managing companies, the report said.

Having outside firms oversee airport concession operations would free Mr. Sola and his team to focus solely on the operation and expansion at the airport, Mr. Giménez said.

“If you go on a cruise ship, you have two captains – the captain of the ship and the captain of the hotel – and I look at the airport in much the same way,” said the mayor. “We are not experts at running a mall… [and] that’s why we need to go forward with an RFP.”

However, by the time Ms. Sosa’s item comes up next month, those provisions could be significantly altered.

Rather than accept Mr. Giménez’s report in expectation of the RFP next month, commissioners instead deferred the item.

Chairwoman Audrey Edmonson said she’d spoken to directors of other airports that had adopted the concession management model being considered. What she found out, she said, was discouraging.

“I cannot support that,” she said, directing the administration and Mr. Sola to set up a workshop so commission staff and commissioners could mull over the details.

Mr. Sola said the new lease agreements would, in fact, allow the airport to “chew up” prior contracts dating back to the ’90s that have no living wage provisions.

“Whatever new contract we issue,” he said, “when we issue a solicitation, it will have all the requirements that this board has been approving throughout the years.”