Advertisement
The Newspaper for the Future of Miami
Connect with us:
Front Page » Business & Finance » Skilled labor shortage may swamp marine industry 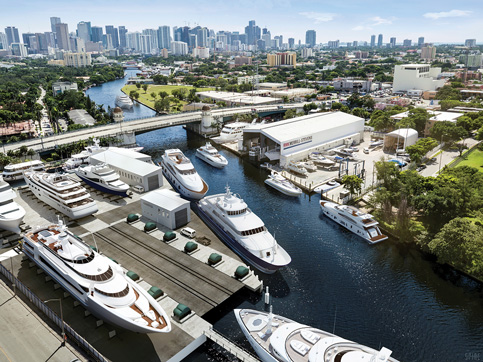 Miami’s marine industry is a major economic engine, but a shortage of skilled labor might slow it down, members of the Miami River Commission learned at their meeting Monday.

Don MacRae, chief operating officer of RMK Merrill-Stevens, said ordinary maintenance on a yacht costs about 10% of the vessel’s price each year. And with yacht prices soaring into the stratosphere, that means lucrative work for shipyards.

“Some captains have a favorite shipyard that they come back to year after year,” he said. And while the vessel is out of service, crew members go ashore to eat, drink, and spend money, he added.

RMK Merrill-Stevens is in the final stages of renovations and improvements to both of its boatyards, which straddle the Miami River just west of Northwest 12th Avenue.

The $30 million renovation, which included dramatic changes to both yards, has been in the planning stages about three years.

The South Yard was modernized after Turkish industrialist Rahmi M. Koç bought the former Merrill-Stevens in 2013 and christened it RMK Merrill-Stevens. The South Yard was updated with new technology and equipment, including a 100-ton shiplift. The North Yard was completely rebuilt and a 2,700-ton shiplift is in the process of being installed, making RMK Merrill-Stevens the only yard south of Jacksonville that can work on mammoth mega-yachts and large US Coast Guard vessels. Though the exact timing is still being worked out, the North Yard expects to receive its first customers early next year.

The revitalized shipyard will employ 120 to 150 people, many of them in high-tech or skilled craft roles, Mr. MacRae said.

There are more jobs available than craftspeople to fill them, he said. “Everyone is now told ‘go to college,’ and with the rise in college admissions comes a decline in trades. The lack of people entering the trades is a real problem. We’re partnering with trade schools to look for solutions.”

“It’s a big challenge for the industry,” said Mark Bailey, executive director of the Miami River Marine Group. “We need more educational programs and training, because a lot of the skilled labor force is retiring.”

“We’re in it for the long term. We want to be part of the rebirth of the Miami River.”