Advertisement
The Newspaper for the Future of Miami
Connect with us:
Front Page » Top Stories » Pocket park could be early piece of Underline

Pocket park could be early piece of Underline 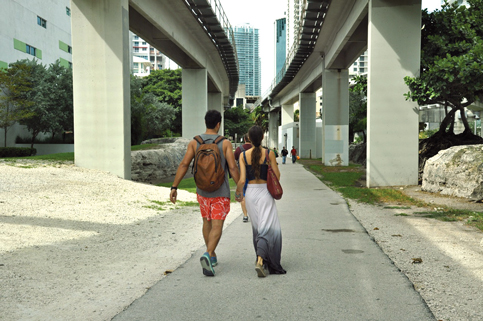 A formal city-county agreement that will allow improvements to kick-start full construction of the first phase of the 10-mile Underline comes before a county committee for a recommendation this week.

The Parks Recreation and Cultural Affairs Committee is being asked to bless a master maintenance agreement that would allow the county or its designee to build improvements in the city’s rights-of-way to create the linear park. Work on the first segment south of the Miami River, called the Brickell Backyard, started last December and is expected to be completed in June 2020.

The committee’s blessing would kick the matter over to the full county commission for a final OK.

A year ago county commissioners were asked to approve the first half-mile strip Under the Metrorail in Brickell, more than $14 million to construct the stretch at a price more than 21% over engineers’ earlier estimates.

Amenities planned in the stretch of the project from the Miami River south to 13th Street include:

■A new gym area with a flexible basketball court, gym equipment and space for group classes and activities.

■A staging area for concerts, movies, yoga and other group activities.

■A new game area of fixed tables and chairs with spaces to support community interaction. A dining area that county documents say will be “accessible to bus, trolley, Metromover and Metrorail patrons, as well as visitors and residents.”

Other amenities in the first portion of the Underline are to include landscaping of native vegetation and new wayfinding signage.

At that time, funding sources for the work were $5,439,866 in road impact fees, followed by $4,871,690 from the City of Miami and $3,944,000 from the Florida Department of Transportation. The county was to directly reimburse The Underline Management Organization Inc. up to $5,000 a year for its costs in background checks, and to pay the management organization $17,944.13 a year from the county’s Department of Transportation and Public Works Budget, the amount the department had been spending to maintain the bike paths that are to become part of the Underline.

The maintenance agreement that the committee was to act on this week would have no additional fiscal impact on the county. The agreement allows the county to delegate maintenance operations to the management organization.

The project began when Friends of The Underline, in collaboration with the county, sought to transform 10 miles of land beneath the Metrorail into an iconic linear promenade with a bicycle and pedestrian commuter-exercise urban trail. The stretch extends from the Dadeland South Metrorail Station near Dadeland Boulevard to the Miami River.

The concept of creating a green linear park under the Metrorail is not novel: it was conceived when the Metrorail was first developed in the 1980s. The Underline is to enhance the bicycle and pedestrian pathway, add native landscaping, lighting, signage, drainage and recreational facilities. It is also to have amenities and recreation-related concessions.

About half of the Underline’s path is within Miami’s city limits, which end at the intersection of Orange Street and Southwest 38th Avenue. Within the city lie four segments of the Underline: Brickell Backyard, which is expected to be finished by the end of June 2020; a second segment, where procurement is underway and construction is to start about September 2020; and two more segments, expected to start in May 2020, according to the memo to county commissioners for this week’s committee meeting.