Advertisement
The Newspaper for the Future of Miami
Connect with us:
Front Page » Government » Miami strives to get operator for Virginia Key marinas

Miami strives to get operator for Virginia Key marinas 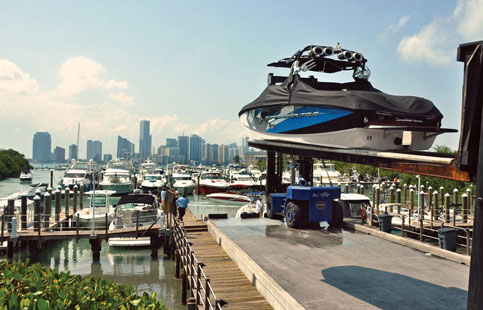 With the November election looming, the Miami City Commission is set to once again address the future of the city’s property in Virginia Key, with two related items included in the agenda for today’s (9/12) commission meeting.

One resolution is to have the commission approve the city manager’s recommendation that Virginia Key LLC as top-ranked proposer be granted a lease of the city-owned Virginia Key waterfront property consisting of the Rickenbacker and Marine Stadium marinas. The second would add a referendum to the November ballot asking voters to approve or disapprove of the lease.

During the July 11 commission meeting. Commissioner Ken Russell pointed to three options for the property: self-management of the marinas by the city, third-party management by an outside operator, or approving the two items on today’s agenda and in effect recognizing Virginia Key LLC as the highest bidder.

A motion to approved a lease to Virginia Key LLC as highest bidder failed to get the needed votes, with only Keon Hardemon and Wifredo “Willy” Gort voting in favor of the motion. Manolo Reyes voted no, suggesting that the marinas be managed in-house instead.

A motion by Mr. Russell to have the request for a proposal completely scrapped failed to garner a second, with Mr. Reyes having requested more information on what would happen if the city were to take over the property.

“It’s shocking to be at this stage, and then to see us say, ‘Let’s take it over.’ I feel like we could have taken it over from the very beginning,” Mr. Hardemon said.

The commission was left to indefinitely defer the two items related to the marina, with Mr. Hardemon and Mr. Gort voting against the deferral.

During the meeting, multiple persons noted the more than two years and multiple deferrals over the fate of the city-owned property.

“I’d be remiss if I did not state on the record on behalf of the administration that I believe – and Commissioner Hardemon said it best – this has gone long enough: 17 deferrals, three or four court dates, two RFPs,” City Manager Emilio González said. “We’re looking silly here, and I hate using that word. I want to be professional. I will stand by whatever decision you gentlemen make, and I would salute the flag smartly and carry it out. But I feel compelled to tell you that we equally strongly believe that we should move forward with this.”

Biscayne Marine Partners LLC, the second-place bidder and the current operator of the Rickenbacker Marina, had filed a bid protest after the city administration declared Virginia Key LLC the highest bidder.

Biscayne Marine also sued the city in district and appellate courts, though the courts recently sided with the city. The lawsuits had held the commission back, with City Attorney Victoria Mendez having suggested the city not act while litigation was pending.

At a June meeting, Al Dotson Jr., an attorney for the company who has been pushing commissioners to award the deal to Virginia Key LLC for months, claimed the city had lost more than $3.8 million by not bringing in a new operator.

Virginia Key LLC, a joint venture of RCI Group and Suntex Marinas that says it plans to invest more than $80 million to create Virginia Key Harbour & Marine Center, has been under the microscope for various other reasons, including suggestions by Mr. Reyes that someone associated with the venture had business dealings in Cuba.

Commissioner Joe Carollo has asked of the city manager to report to the commission how much the city made each year for the past 10 years at Marine Stadium Marina, a city-run dry dock facility next door to Rickenbacker Marina.

The proposed lease to Virginia Key would run 45 years with two 15-year renewals. The company would pay a $2.2 million annual base rent and 6% of its revenues. The base rent would be adjusted annually by the greater of the Consumer Price Index increase or 3%.

Prior to the request for bids back in 2017, the city had also requested proposals in 2015. Commissioners rejected all those proposals and asked staff to again request proposals.