Advertisement
The Newspaper for the Future of Miami
Connect with us:
Front Page » Real Estate » Massive change is coming to Government Center 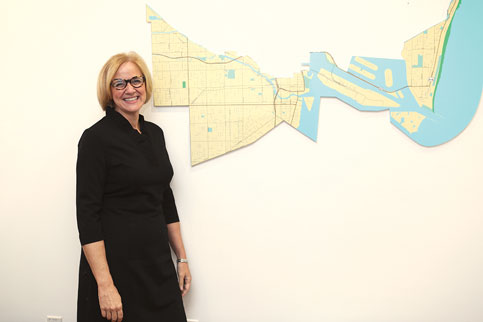 Change is coming to Government Center, a 20-acre area encompassing 16 county-owned properties in downtown Miami, and the document that will guide its transformation is due to be delivered to Miami-Dade lawmakers by early January.

That “visioning study” will mark the latest step in a process that began last July, when the county created the new Government Center Rapid Transit Zone.

The move reclaimed jurisdiction over the area previously under City of Miami control.

The goal, the item said, was to “determine the optimum mix of uses and cohesive designs to revitalize [the] area… with signature, sustainable, compact, pedestrian- and transit-oriented developments” for business, government and residential use.

On July 27, the county’s Regulatory and Economic Resources department hosted a public charrette at the main library across from the Stephen P. Clark Government Center building to discuss potential developments.

Additionally, students enrolled in classes at the Department of Landscape Architecture + Environmental and Urban Design at Florida International University, who toured the area alongside county personnel, will provide concepts for what could be done with the area, Mr. Kogon said.

“Each student is going to do a development project for the area,” he said. “I don’t know at this point whether we’re going to incorporate those ideas or have some type of separate document, [but] I think we’re going to get some very interesting proposals.”

“I was very pleased with the range of attendees,” she said. “There was a consensus about what needs to be done. Now we’re moving forward with consolidating all of those ideas.”

Those ideas, she said, include schools, parks, green spaces, affordable housing, offices, a community center, better bus shelters and terminals, adequate street lighting, a walking street between the Miami River and Biscayne Bay, places for police and media to park near county hall, and drop-off and pickup points for ride-sharing services to unclog traffic.

Other developments, Deputy Mayor Jack Osterholt wrote in a June memo to county commissioners, could include blended residential, commercial, office, hotel and restaurant developments tied to government buildings and transit facilities, as well as public open spaces and pedestrian bridges.

Ms. Higgins told Miami Today that it’s unlikely a second charrette will take place, but her office is still accepting ideas, mostly by email, which it then forwards to Mr. Kogon’s department.

“We’re not in the idea-rejection business,” she said.

At a discussion of potential changes to the area during the Greater Miami Chamber of Commerce goals conference in June, Ms. Higgins noted a particular need to give HistoryMiami and the main library new homes. At present, the two share the Philip Johnson-designed cultural plaza across from the Clark building, for which there have long been talks of razing it to take advantage of the unused air rights above it.

Doing that, she said Tuesday, will come as part of a phased approach to redeveloping the area, the next step of which will happen by March 2020 through a county-issued request for proposals.

“We can’t do the whole thing at once. I might not like the way one piece of property’s being used, but it’s still being used, and we can’t demolish the Parks Department building unless they have some other place to work,” she said. “What Nathan and his team are doing is providing a cohesive design the neighborhood would need – the design standards – so even if we build it in phases, everyone knows how their building connects to the rest of the neighborhood.”