Advertisement
The Newspaper for the Future of Miami
Connect with us:
Front Page » Transportation » Exit ramp bottleneck target on Miami-Dade expressway 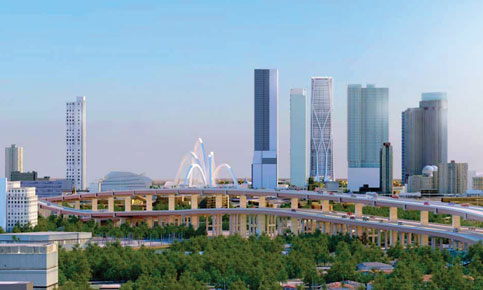 Efforts are underway to fix a frustrating exit ramp bottleneck on a popular Miami-Dade expressway as part of a massive ongoing design-build project encompassing three major roadways in the county.

Foundation work to widen the eastbound SR 836 ramp to northbound I-95 is being done during the day within an established work zone and at night when lane closures are necessary, Florida Department of Transportation spokesperson Oscar Gonzalez told Miami Today.

On the I-95 side, workers continue to extend an auxiliary lane on northbound I-95 between Northwest 17th and 29th streets that will receive the additional traffic from the ramp, which will be converted to two lanes to improve traffic flow.

That much-needed upgrade is among a multitude of components in the public-private project to enhance I-395, I-95 and SR 836 funded by $616 million in state dollars and $186 million toll revenue from the recently abolished Miami-Dade Expressway Authority (MDX).

The contractor, he said in an email last week, has established two work zones on the 836 – one from Northwest 12th Avenue to I-95 to allow for bridge-widening work to begin, the other between Northwest 17th Avenue and the Miami River.

“The contractor is driving concrete piles on the south side of SR 836 at Northwest 17th Avenue [and] working on removing existing beams to allow for the widening of the bridges in the area,” he wrote. “Further to the east, the contractor continues to work on removing traffic railing on the south side of SR 836 for widening activities between Northwest 12th Avenue and I-95.”

Construction on the 836 will ultimately result in a double-decker viaduct rising over the median gap between the Northwest 17th Avenue toll area and the Midtown Exchange, enabling drivers to bypass the existing I-95 interchange and connect to I-395.

“You’re eliminating a lot of those operational deficiencies by separating those traffic movements,” MDX Director of Engineering Juan Toledo previously told Miami Today. “If you want to go down toward the beach or take I-95 north or south, basically what it’s going to do is separate those movements so it… distributes traffic flow more efficiently and eliminates those bottlenecks you have there, with people trying to go to I-95 north at the last minute or I-95 south.”

Construction of the viaduct, a technical proposal from Archer Western-de Moya said, also provides a long-term solution to rebuilding the existing 836, whose major structures were built in 1968 and are near their design service life.

To accomplish the work as quickly and efficiently as possible, the contractor has initiated night and continuous weekend closures, as well as weekday work “in areas that do not require lane closures.”

Late this month, he continued, the contractor “is scheduled to implement full nighttime closures on I-95 from SR 836/I-395 to SR 112/I-95… to allow for the erection of overhead sign structures.”

Following the Aug. 12 permanent closure of Northeast 12th Street, Mr. Gonzalez said, Archer Western-de Moya has started utility relocation in the area and in a week is likely to begin a one-month auger cast test pile program that will be followed by foundation work for the I-395 “signature bridge” in early November.

Once built, the six-arch bridge – described as a “bridge for the ages” by county Mayor Carlos Giménez in a May 2017 letter to Rachel Cone, then the state transportation secretary – will span 1,025 feet over Northeast Second Avenue and Biscayne Boulevard.

Archer Western-de Moya as of last week had established a work zone on the eastbound I-395 local connector road from I-95 to Northwest First Avenue, where workers are removing traffic separators and barrier walls and are driving steel sheet pile to prepare for construction of bridge foundations for a new connector road.

Westbound traffic on I-395 from Northeast First Avenue to Northwest First Place was to have started Sept. 11 to allow the contractor to begin demolition of the traffic railing in preparation of the bridge foundation work, Mr. Gonzalez wrote.

Removing the I-395 traffic railing, he added, will require nighttime closures on I-395 and on local roads below the work zone.

The Florida Department of Transportation in 2017 selected Archer Western-de Moya as the team to head up the vast $802 million project after a three-year vetting process.

The joint venture team is comprised of Archer Western Contractors, an Atlanta-based construction firm whose parent company, the Walsh Group, ranked the 18th largest contractor in the nation by Engineering News-Record; and the de Moya Group, a Miami-based highway and bridge construction company that according to its website “specializes in complex major infrastructure projects in Florida.”