Advertisement
The Newspaper for the Future of Miami
Connect with us:
Front Page » Government » Task force to boost Palmetto Bay revamp 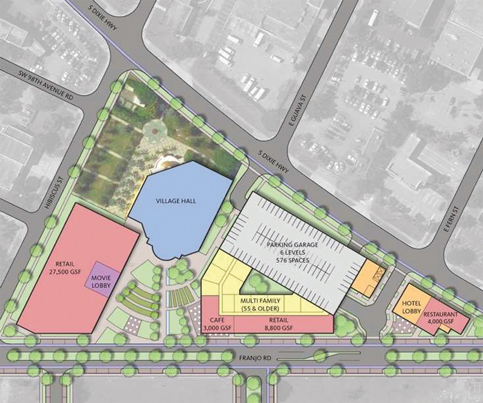 Palmetto Bay’s negotiations over a project that, if approved, will transform the village’s downtown into a modern city center will probably begin this month and include a new task force created to boost public input, Mayor Karyn Cunningham said.

The five-member task force will enter talks alongside Village Manager Ed Silva with developer i3 Interests LLC, which sent an unsolicited proposal to the village in 2018 to redevelop 2.6 acres at 9705 E Hibiscus St., where Palmetto Bay’s village hall, police station and other structures stand.

The village then requested proposals to seek competing bids. It received two, from which it selected i3 Interests as the highest-qualified bidder.

Ms. Cunningham, Vice Mayor John DuBois and fellow council members Patrick Fiore, Marsha Matson and David Singer are each to appoint a person to the  “Manager’s Task Force,” per a July 15 village resolution.

Ms. Cunningham appointed Mr. DuBois to serve as the liaison between the council and task force, whose members are to take recommendations from each council member.

Not every councilperson has appointed a task force member yet, she said.

Having village council members make appointments to an advisory task force to aid in negotiations for a public-private development is something of a departure from typical procedures, the mayor said, but in this case it was appropriate.

“I wanted it to be brought into the public eye rather than behind the scenes,” she said. “There will be public meetings with the manager and task force, and I would assume the developer or a designee will come forward to have discussions and the task force will make a recommendation to the council.”

The council voted June 3 to delay further talks with i3 Interests to the following month, citing an unfinished redrafting of the village’s downtown development code and a need to better define some of the proposal’s features.

During 90 minutes of talks, several village residents voiced concern over the scope of the project, which includes a three-story entertainment center housing a movie theater, expanded village hall with a relocated entrance, mid-range hotel run by a major operator, up to six-story parking garage, senior housing, retail, restaurants and public plaza spaces.

Ms. Cunningham told Miami Today that while she believes the project will be a benefit to Palmetto Bay – an opinion supported by Village Community and Economic Director Maria Pineda – she wants to ensure it conforms to the village’s standards.

“I like the concept of bringing retail, which is something the community has asked for, as well as restaurants and entertainment,” she said. “A component of the project I’ll be keeping an eye on, however, is that it fits with the new downtown urban village code as it relates to height.”

That, she said, is one big reason why she and Mr. Fiore and Singer voted to defer further talks with i3 Interests in June.

Ms. Matson, the sole “no” vote – Mr. DuBois was absent from the meeting – argued at the time that it would be more prudent to wait until the village finished rewriting its code before setting a decision date.

“[Deciding now] is the cart before the horse,” she said. “We’re working on rewriting our code [and] should not have the proposal just outside the door.”

At the same meeting, i3 Interests Principal Rene Joubert said that, upon approval of the project, predevelopment processes would take about a year before construction begins.

Over that time, i3 Interests – comprised of architecture firm Gensler and Burton Construction – would interview contractors specializing in the project’s various parts.

Cost estimates, he said, are based on projections from contractors Gensler spoke with about the project, whose funding would come from three sources: private money, bank loans and village dollars.

“That doesn’t mean the village has to write a big check,” he said, listing land leases or parking revenues as alternate funding sources for the village.

However, the “big check” option would remain on the table, he said, as is the case in Homestead, where i3 Interests is constructing a $51 million mixed development with similar features, as well as a tech-driven “Cybrary.”