Advertisement
The Newspaper for the Future of Miami
Connect with us:
Front Page » Healthcare » Shortage of Psychiatrists makes care spotty at best 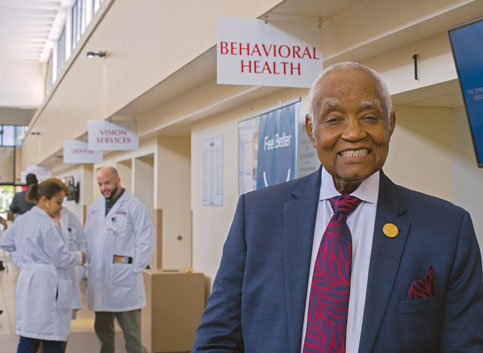 A nationwide shortage of psychiatrists is among key factors making it difficult for South Florida’s mentally impaired residents to find care in their own communities.

“Locally we have a large population of people with mental illness who are not receiving the services they should,” said Col. Brodes Hartley Jr., CEO of Community Health of South Florida. “Because there is no cadre of professionals to take care of them, people are not getting the care they need to overcome or cope with their illnesses and go on to live successful lives.”

In response, Community Health plans to begin construction of a children’s crisis unit as soon as the permitting process is complete. The Dr. Jacquelyn T. Hartley Children’s Crisis Center, specializing in treating children who have been victimized by abuse or exhibit severe psychological issues, will be on Community Health of South Florida’s main campus, 10300 SW 216th St.

According to the Kaiser Family Foundation, as of the end of 2018, in Florida’s 183 Mental Health Care Health Professional Shortage Areas – a federal designation for areas where the population-to-physician ratio is greater than 3,000 to one – the current supply of working mental health professionals meets only 16.13% of the need. Just 11 states scored lower.

Data from the Florida Department of Health’s 2017 Physician Workforce biennial report suggests that, near term, this crisis is only going to get worse. A whopping 48% of psychiatrists surveyed were over the age of 60, the highest percentage among medical specialties included in the report. And with just 7.8% of their colleagues under the age of 40, retirements will probably far outnumber replacements.

Not everyone in county health care feels the fallout yet. Patricia Ares-Romero, chief medical officer at Jackson Behavioral Health Hospital, says “this has not really affected Jackson Health System. We have been able to hire psychiatrists.”

“More and more people are being diagnosed with mental illnesses,” Col. Hartley said. “When primary-care providers suspect someone has a mental illness, they look for someone to refer them to – and often there is no one. In many counties there is not a single psychiatrist available.”

Children, he said, are particularly affected by this shortage.

“Because we are a designated receiving facility,” Col. Hartley said, “we receive more than 600 children annually who are Baker-acted by the police, although we do not have facilities for children.”

Florida’s Baker Act can be initiated by judges, law enforcement officials, physicians or mental health professionals to allow involuntary commitment and examination of persons who may have a mental illness or are deemed a danger to themselves or others.

“Because we don’t have a children’s crisis unit, he said, “we have to transfer them to another facility. That’s hard on the child and hard on the parents.”

“Long-term,” Col. Hartley said, “we are trying to help the community by growing our own future generations of healthcare professionals.”

The program is funded by a grant from the Health Resources & Services Administration under the Affordable Care Act to help develop physicians in areas of great need. Faculty members were assembled though affiliations with many local partners, including Larkin Community Hospital, Nova Southeastern University and Jackson Health System.

One Response to Shortage of Psychiatrists makes care spotty at best