Advertisement
The Newspaper for the Future of Miami
Connect with us:
Front Page » Communities » Shake-A-Leg for disabled seeks city-aided upgrade 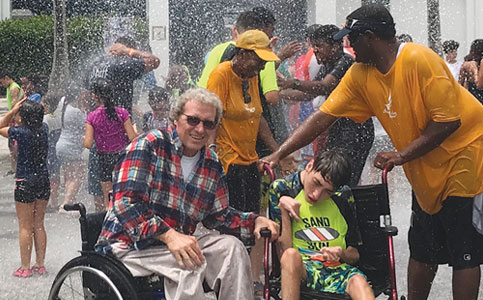 Shake-A-Leg Miami – a water sports organization serving youth and adults with disabilities, including veterans – will celebrate its 30th anniversary next year, an occasion that also marks the expiration of its current management agreement with the city.

“We are in the process of discussions to renew the agreement,” he said. “The discussions also involve the launch of a capital improvements campaign and our annual campaign to fund the programs we offer.”

From a strategic planning standpoint, Mr. Horgan said, without a long-term commitment from the city, donors are hesitant to make a long-term gift, “and we want to ensure not only that these programs can continue, but also that Shake-A-Leg remains a public access point for many years to come.”

Under the City of Miami’s charter, said Ken Russell, commissioner for District 2, the city commission is charged with securing the highest and best use for city-owned land – a term he says covers much more than monetization. Commissioner Russell is sponsoring the management agreement extension.

“We could make more money if it had retail or commercial uses,” the commissioner said, “but Shake-A-Leg provides a very special and unique opportunity not only for disabled children but also for disadvantaged kids and veterans. They are not at any risk of losing the space, but we need to protect their long-term future and establish more predictability for their capital campaign.”

Part of the city’s mandate includes public access to Biscayne Bay, he said – “a place where anyone is able to put a kayak into the water, whether or not they are associated with Shake-A-Leg.”

Growing up in Rhode Island, known as the Ocean State, Mr. Horgan developed a love of sailing. After an automobile accident left him paralyzed at the age of 22, he conceived of a program that would help others with disabilities experience a sense of freedom from their limitations through water sports.

On the advice of a doctor, he relocated to South Florida. Shake-A-Leg Miami officially launched in 1990, Mr. Horgan said, at the Columbus Day Regatta.

“We entered four boats in the fleet of 400,” he said, “and one of ours won. That brought us to the attention of a lot of people.”

Gradually, with grants from city and county bonds issues as well as funds raised in the private sector, Mr. Horgan says Shake-A-Leg was able to strengthen and expand its programs. A collaboration with Miami-Dade Public Schools, for example, led to a vocational program for students with disabilities.

“When you get people out on the water and give them power over a boat,” he said, “it’s for a great learning opportunity and a very positive thing for our students.”

“In addition to the maintenance of our own fleet,” he said, “they are working on restoring a PT boat built in the 1940s that will be the flagship vessel for the vocational school training programs.”

“Those in wheelchairs can transfer into a seat that gives them stability so they can focus on sailing,” he said. “We also have a replica of Hemingway’s fishing boat Pilar made by a boat builder in Rhode Island. He loans it to us to take out veterans.”

Shake-A-Leg, Commissioner Russell said, is also very active in environmental issues, such as the city-sponsored clean-up of Biscayne Bay coming up Sept. 21, the International Day of Peace. “They’re good stewards of the environment,” he said, “and a very good neighbor to have in the area. The residents really enjoy it.”

“The relationships we’ve established with schools, disability organizations and our philanthropic partners,” Mr. Horgan said, “have been built through the support of the community, and in turn we have shaped our vision to meet the needs of the community. As a result, Shake-A-Leg has become a national model of a public-private partnership to serve underserved groups of people.”