Advertisement
The Newspaper for the Future of Miami
Connect with us:
Front Page » Profile » Jose Arrojo: Leading county Commission on Ethics and Public Trust 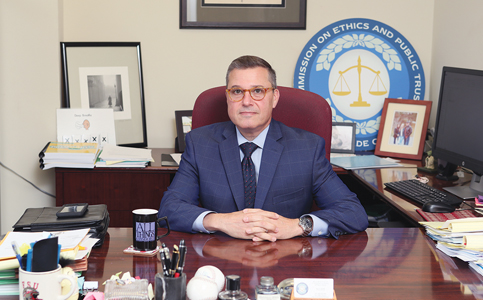 Jose Arrojo spent much of his first year as executive director of the Miami-Dade Commission on Ethics and Public Trust reshaping the office’s inner workings while keeping close watch on public officials and employees here.

That, he said, has involved restructuring staff, raising the budget and priming his team to increase their legal work, outreach and improve the agency’s online presence to better reach everyone in the county and its 34 municipalities.

“I’ve been strengthening the legs under the table so we can get up and dance on it,” he said.

He took over the position exactly one year ago today. The move marked the latest step in a legal career spanning three decades, including two stints comprising more than 20 years at the State Attorney’s Office under State Attorneys Janet Reno and Katherine Fernandez-Rundle, for whom he served as chief assistant state attorney from 2004 to 2018.

“My career has been almost exclusively in and about government,” he said. “And even when I was away, I was still close to it because I represented public employees.”

Now, as head of the 15-employee independent agency whose $2.5 million annual budget – among the most modest in the county, he said – funds a team of investigators and support staff whose work is vital to protecting democracy by keeping those granted public trust accountable and honest.

“With our resources, we’re called on to provide ethics opinion guidance in enforcement and compliance for 30,000 county employees, 10,000 employees at Jackson Health System and every elected official and [government] employee,” he said. “It’s a small, tight operation with a huge job.”

Mr. Arrojo sat down with reporter Jesse Scheckner. The interview, recorded by Jahmoukie Dayle, can be found on MiamiTodayNews.com.

Watch the interview below: