Advertisement
The Newspaper for the Future of Miami
Connect with us:
Front Page » Opinion » College board picks fine temp, needs clear long-term vision 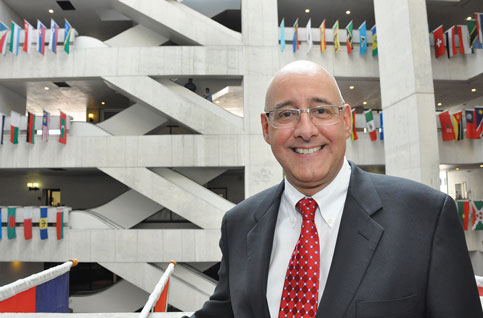 If naming a temporary president of Miami Dade College was far from the best outcome of a contentious process to replace Eduardo Padrón on his retirement last week, it was the best that could be salvaged under the circumstances.

And if they had to pick a temporary president rather than follow agreed-upon procedures to name a president, the college was left in the very capable hands of a man who has every qualification to serve – and has done so before.

Rolando Montoya, who was unanimously named by an anything-but-united college board of trustees, held the presidency after Dr. Padrón once before: in the 1990s, the president stepped down only to plan to return and was replaced for an interim month by Dr. Montoya.

Not only has Dr. Montoya sat at the president’s desk before, but he has every qualification to head the vital institution for the long run – though he says unequivocally that he doesn’t want to stay on and is happy in retirement.

That’s good: he can keep out of the line of fire between those who want to select someone who was a finalist in the original competition of about 500 people and those on the board who want to start over with different qualifications for the job.

That political battle will continue at the board’s next meeting this month as it plans to hire new headhunters and develop a search oversight team that might not contain the same community and academic leaders who winnowed the original crop of candidates. There is no board unanimity about how this will shake out.

Dr. Montoya is to work with the college’s human resources director to find the next recruitment firm – guided, it would seem, by trustees Carlos Migoya and Michael Bileca.

That job may require of Dr. Montoya a quality that he has aplenty: diplomacy. He’s a diplomat, as one participant says, “cool, calm and collected.”

In fact, he was a professional diplomat: from 1980 to 1984 the Cuban-born Dr. Montoya was sent to Miami from Costa Rica as that nation’s commercial attaché.

He will need not only that business background but especially the diplomatic side as he guides a college of 165,000 students while the board remains divided over how to govern the school as a new president comes aboard – a process estimated at six months to a year, during which time the calm voice of Dr. Montoya will be essential on campus.

He’s intimately familiar with MDC, having retired several years ago from its top academic job as provost. It was part of a 30-year career at the college, starting in 1986 with 11 years as a business professor on the North Campus, then moving into administration, eventually becoming president of the Wolfson Campus downtown and concluding at what is essentially the college’s number-two job.

After he retired, he was also appointed to the college’s board of trustees, where he served a year, so he knows how the board and president interact.

Those attributes make him both liked and, more importantly, respected by all the key players, from the faculty through the administration, the board, the students, and even the community – he served on Miami’s Downtown Development Authority while he was president of the Wolfson Campus.

The fact that he has all the credentials yet doesn’t want the job for long makes Rolando Montoya a perfect choice for Miami Dade College.

It’s an institution for which he has utmost respect. He told Miami Today in early 2014 why the college has grown so much and become perhaps the national leader among urban public colleges:

“The main driving factor is the leadership of the college. President Eduardo Padrón really wanted to create an institution in Miami that promotes social mobility and also satisfies the economic needs of this community by developing the workforce for this community, and also to make sure that other opportunities are provided for low-income people and for the recent immigrants of our very-diverse city.

“Practically everyone in this community has had a connection to MDC in one way or the other. Since we were founded 52 years ago to the present, 2 million persons have passed through our classrooms.”

Some of those 2 million plus spoke to the trustees last week before they decided first to select an interim president and then to name Dr. Montoya.

The first speaker, county Mayor Carlos Giménez, made the college’s impact on its past students very clear: “I don’t think I’d be standing before you today if it hadn’t been for Miami Dade College.”

The mayor also asked the trustees to follow the rules they had set before Gov. Ron DeSantis named a new majority on the board.

The process, the mayor said, had been sidetracked “by I don’t know what kind of motives.”

If there was a motivation, nobody would state it clearly.

Louis Wolfson III, who sat on the board of trustees when it selected Eduardo Padrón in 1994 and whose family not only was a founder of the college but has contributed $170 million to it, hinted at underlying issues while asking for a selection based purely on the ability to guide a community gem to its highest level:`

“Not that you’re planning to, but to even consider replacing Dr. Padrón with a political influencer, someone who does not understand the complexities of MDC or higher education, to head up this institution, will absolutely and positively erode our hometown college’s reputation and community trust. A political appointee would divide our college, our professors, our staff, our community leaders, our community volunteers, and our community’s trust and support for Miami Dade College. You can see and hear that already festering throughout our entire community.”

That community fear of political intrusion into a hitherto non-political college that is the educator of the underserved was the great fear going into the meeting. The selection of Dr. Montoya as caretaker should alleviate some of that concern for the moment.

The board, fragmented as it was earlier in the meeting, was unanimous on an interim choice that apparently had been made in advance by some trustees, though Dr. Montoya’s name was never mentioned until well into the meeting. He said afterward that some of the trustees had approached him over several weeks to see if he would take the interim role.

He will no doubt serve diligently and with support from all factions. But the next meeting of the trustees will be pivotal. Ideally, going forward, another qualified search firm will be enlisted with the same exact search committee named and the same criteria for choosing a president.

A broader search net might be good. Unfortunately, every qualified academic in the nation knows what is going on in the MDC search process and many of them will be deterred by it.

In the end, the selection committee might be handed the same top candidate list a second time and those names might be passed on to the trustees to make the final choice – who should be not a political leader but a visionary academic who fits this community and can hit the ground running. Anything less would do a grave disservice to all.