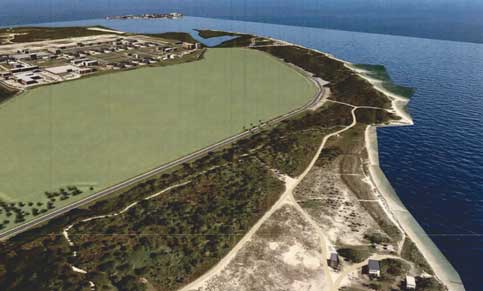 It will be at least another two years before Miami-Dade County turns the old landfill on Virginia Key over to the City of Miami, which has plans to develop the site into a sports park.

The city owns most of the barrier island, which connects the mainland with Key Biscayne via the Rickenbacker Causeway. Responsibility for the landfill rests with the county.

Miami-Dade County’s expansive remediation plan designed to protect public health with new capping and sealing measures has seen its schedule adjusted in recent years; in 2017, city officials were told the remediation was expected to be complete in 2018.

The latest up-to-date schedule pegs completion of remediation of the 125-acre site sometime in 2022.

Miami Today recently inquired about the current timeline for the remediation project to the county’s Department of Regulatory and Economic Resources.

Lorna Bucknor is a senior scientist in hydrology with the department’s Environmental Monitoring & Restoration Division.

In an email response to Miami Today, Ms. Bucknor said: “The design phase is anticipated to be completed by December 2019. Once the design is approved, preparation of the bid package is conservatively estimated to take 3 to 4 months. Therefore, the expectation is that the project will go out to bid in March – April 2020.”

The large landfill area, the heart of the island, is east of Miami Marine Stadium and the historic basin and is a major component of the city’s 2010 Virginia Key Master Plan.

According to the master plan, the centrally-located site formerly was a municipal and regional dump. It is south of the Miami-Dade County Sewage Treatment Plant. The city has a commitment from the county to close and remediate the landfill.

“The closure plan has provided impetus for creating a premier regional park for the City of Miami that caters to the needs for active recreation, environmental education and supporting facilities that will add varied opportunities to provide fitness and education for users of all ages,” says the master plan.

The county was asked when the city might get the property for future uses.

“Construction is anticipated to be certified complete in early to mid-2022 after which project will be handed over to the City of Miami for their development,” Ms. Bucknor wrote.

A report updating the landfill closure, prepared by Wilbur Mayorga of Miami-Dade County Department of Resource Management, has been presented to the Virginia Key Advisory Board.

It tells the history of the landfill, which received municipal garbage and sewage treatment sludge for decades.

The landfill stopped receiving waste in May 1978, after intervention from the Florida Department of Environmental Protection. Capping activities were completed in 1980.

Up to 37 monitoring wells were installed to assess on and off-site groundwater quality. Plus, about 95 soil borings were done throughout the former landfill in March 2016.

The soil tests found noticeable traces of arsenic, barium, chromium, lead, mercury, TRPH, benzo(a)pyrene and dieldrin above criteria, and most areas have less than 2 feet of cover, the report said.

The remediation plan is a corrective action to prevent exposure to contamination and render the property safe for public use and enjoyment.

Methane has also been found and measured at the former landfill, the county’s report said.

Ten methane gas monitoring probes were installed to measure and monitor the concentration of methane gas along the northern perimeter of the landfill area.

Methane was detected in five locations above the Lower Explosive Limit (LEL) on the north side of the landfill.

A methane abatement plan addressing methane gas along the northern perimeter will be incorporated in the Remedial Action Plan and will be a part of the landfill closure design.

Groundwater remediation is to address an onsite ammonia plume through groundwater recovery and disposal.

“The extracted groundwater will be disposed, via the deep injection to the boulder zone (below the Biscayne Aquifer) deep injection well located at the Virginia Key Wastewater Treatment Plant,” the report said.

It goes on to say the removal of contaminated soil and solid waste is not proposed.

“The former landfill will be properly capped by placing a minimum of two feet of clean fill over the contaminated soil and the solid waste.

“The material originating from the construction of the Port of Miami Tunnel (POMT), and which is currently stockpiled at the [landfill] site, will be used to provide most of the required two feet of cover. Site will be regraded, to include waste relocation as appropriate to achieve optimal desired elevation,” the report said.

The master plan for the island shows proposed improvements to the landfill area include a recreation center with restrooms, multi-use recreation space, classrooms, offices, locker rooms and covered outdoor terraces.

There are to be 19.9 acres of sports fields for competition in softball, little league, football and soccer, and a 9-acre open recreation meadow for informal play. An ADA accessible playground, batting cages and four tennis courts would provide additional active recreation.

The balance of the proposed park is to be 85 acres of trees with multi-use nature trails that connect to all park facilities. The park would also have amenities such as picnic areas and a nearby 160-space parking lot, in addition to existing parking along Arthur Lamb Road.