Advertisement
The Newspaper for the Future of Miami
Connect with us:
Front Page » Top Stories » Universities in Miami expect enrollment gains 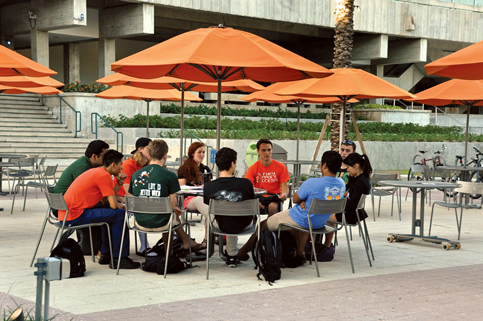 While Florida saw a significant decline in higher education enrollment overall for the spring semester, Miami’s universities are anticipating positive numbers for the fall semester.

For spring 2019, Florida saw an estimated 5.2 % enrollment decline for degree-granting institutions, according to the National Student Clearinghouse Research Center. Florida, tied with Alaska, had the largest estimated percentage decline in a year in which nationwide enrollment for the spring semester went down 1.7%.

But locally, St. Thomas University will be more than doubling its undergraduate enrollment total for this school year with 680 new students expected to start in the fall, according to data provided by the university. Last year, the school welcomed 333 new undergraduates in the fall.

St. Thomas President David Armstrong said the university has been able to attract more students in part because of a clearer vision.

He said among the strategies to bring in more students are financial aid leveraging, raw recruiting methods to capture a larger pool of students who could gravitate to the school’s mission, and the introduction of new programs, such as Ethical Leadership studies.

“When I saw the greatness of Miami, as a great American city,” he said, “we saw the potential in this region for a great Catholic university, and the nice thing is that people are catching” on to the idea.

Similarly, Barry University is also foreseeing a positive year of enrollment. While the official enrollment numbers are still preliminary, the school is already celebrating a “breakthrough year in freshman enrollment,” according to an email from public relations officer Jeremy Jones.

In 2015, Barry had an all-time low enrollment of 441 freshmen. With a “complete reset in our admission strategies to bring those numbers back in the 600s,” Barry is now expecting a 59% increase in freshman enrollment since 2015, with over 700 freshmen. For fall 2019, the projection is approximately 1,000 new freshmen students and transfers, exceeding fall enrollment numbers going back to 2012.

“Our strategy this cycle was centered on increasing engagement in established and emerging markets and developing strong partnerships with key influencers throughout the admissions process. Our feeder patterns suggest that high school counselors and college advisors are referring more students to Barry University,” the email states.

The University of Miami received a record number of first-year applications, nearly 40,000, according to an email from Megan Ondrizek, executive director of communications and public relations.

Because of the high number of applications, the university has had the lowest admission rate in its history at 27%.

Back in May, UM signed a transfer articulation agreement with the Honors College at Miami Dade College, guaranteeing acceptance and merit-based financial support to students who earn an associate’s degree from the college’s honors program and meet transfer requirements.

For Florida Memorial University, it’s unclear whether enrollment for fall will increase, but according to David Kenton, assistant vice president for enrollment management, the total undergraduate number is expected to be between 1,100 and 1,200. Last year, the university’s undergraduate enrollment was 1,192.

To attract new students, Mr. Kenton, said the university has been looking to its current and past students to see what brought them to Florida Memorial, as well as looking at potential students in the state because they could benefit from state-offered programs, such as Bright Futures and Florida Prepaid. Mr. Kenton also said that Florida Memorial offers a special experience for students as one of the few historically black colleges and universities in the state and the only one in Miami.

“We want students to come where they are celebrated, not just tolerated,” he said.

Florida International University could see a slight rise in its undergraduate and graduate rolls.

Studies have found that when the economy is down, higher education enrollment goes up, and vice versa.

According to a study from the US Census Bureau, which focused on postsecondary enrollment around the time of the Great Recession a decade ago, total postsecondary enrollment increased from 17.2 million students in 2006 to 20.4 million students in 2011 but then trended downward to 19.1 million in 2015. Some 2.8 million of the 3.2 million who enrolled between 2006 and 2011 were undergraduates.

Miami Dade College is evidence of the trend. The school is anticipating a 3% to 5% enrollment decline, said Kathy Maalouf, the vice provost of student affairs.

“We’ve seen a continuous enrollment decline with the economy,” she said. “The more jobs that are available, and the more folks are going back to work, the less you see people enrolling.”

Ms. Maalouf said the college has taken proactive measures to attract more students, such as adding courses that offer a blend of the online and in-class experience, accelerated courses, an expansion of scholarships and an increase in outreach to students.