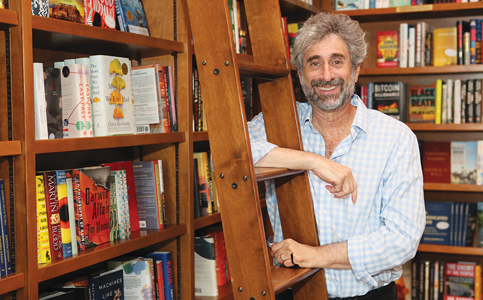 It’s a good thing for Miami-Dade that Mitchell Kaplan decided against becoming a lawyer. The founder and president of Books & Books has done a lot to deepen the county’s cultural footprint over four decades, and if his activities in recent years are any indication, he’s far from finished.

But for a short spell as one of thousands of recent English degree graduates in the late 1970s, he entertained the idea of going into law – his father’s profession, with which he had a familiarity.

He attended law school for two years, but it only reinforced his desire to steep himself as deeply as possible in his love of literary culture.

“The notion of becoming a bookseller kept bubbling up. I found myself in bookstores more than in the law library,” he said. “So I left law school and came back to Miami.”

And the rest is history. He opened Books & Books in Coral Gables in spring 1982 just two blocks from where the business’ flagship location stands today. Two years later, he co-founded the Miami Book Fair, now the largest of its kind in the nation.

Mr. Kaplan is now also a publisher, podcaster and successful movie producer, with numerous film projects in production. All are based on books, of course.

Asked if he’s considered delegating oversight of Books & Books to someone else so he can focus more on those newer ventures, his concise answer is not a chance.

“I love what I’m doing with film and television, [but] I will always be attached and involved with Books & Books,” he said. “When an opportunity is presented, I always ask myself, ‘Why not? Why not try?’ I don’t like to take too many risks, but saying ‘why not?’ is the way you discover things and grow as a person and professionally.”