Advertisement
The Newspaper for the Future of Miami
Connect with us:
Front Page » Education » Miami-Dade Public Schools enrollment falling 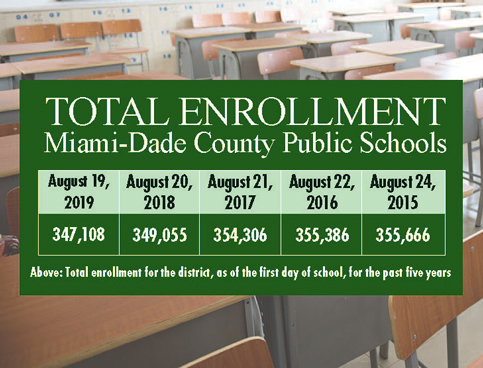 Enrollment in Miami Dade Public Schools has slightly but steadily declined for the past five years, from 355,666 in 2015 to 347,108 this year. These counts are taken at the first day of school, but school sources say not all students begin classes that day.

“As indicated by the data, district-wide enrollment has slightly declined every year,” said Verena Cabrera, administrative director for the school system’s federal and state compliance office, via email. “When comparing from August 2015 to August 2019, there is a 2.47% decline.”

Enrollment by region has slightly declined every year similar to the district overall, but some areas of the county lost enrollees at a more dramatic rate as well, she added.

“Also, birth rates began to decrease around 2007-2008, when the great recession set in. Children born in those years would now be 10 years old, but they are fewer in our schools.”

School bells ring earlier in the fall now, which may complicate the effort to get an accurate count, he added.

“Many families withhold their children from classes until after Labor Day; you may remember as a child that in many places, school didn’t start until [then]. Families may do this because of vacations.”

The indications aren’t all gloomy, he said. “On the other hand, we graduated 22,000 high school seniors this year, more than ever before!”