Advertisement
The Newspaper for the Future of Miami
Connect with us:
Front Page » Government » Coral Gables to fight for right to ban Styrofoam

Coral Gables to fight for right to ban Styrofoam 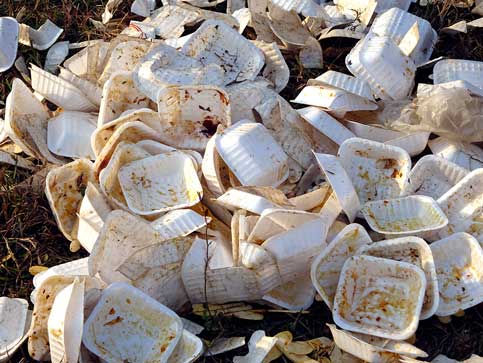 The commission also asked the Florida Legislature to repeal statutes that would inhibit local governments’ ability to regulate polystyrene or single-use plastic bags, and for Gov. Ron DeSantis to step in, as he did when vetoed a law that would have prohibited bans on plastic straws.

“This is a big issue, but the bigger issue is the assault on our home rule charter,” said Mayor Raul Valdes-Fauli.

In March 2016, the Legislature passed a law prohibiting any municipality from regulating Styrofoam or other packaging materials, including plastic bags, if its ordinance was passed after Jan. 1, 2016. Miami Beach and several other cities, which passed bans earlier, were carved out of the legislation. Coral Gables passed its ban in early 2016.

The Florida Retail Federation sued to challenge the ban, which a local court upheld but was struck down on appeal.

“This should be our decision,” said Miriam Ramos, city attorney. She read a portion of the governor’s veto message, which might indicate his support for local rule.

“A number of Florida municipalities… have enacted ordinances prohibiting single-use plastic straws. These measures have not, as far as I can tell… harmed the state’s interests,” The governor said. “Under these circumstances, the state should simply allow local communities to address this issue through the political process.”

Coral Gables was one of the first Florida cities to ban Styrofoam and single-use plastic bags, said Vice Mayor Vince Lago, who sponsored the original legislation. “We’re accountable, and many other cities followed in our footsteps.”

“Weekly, I get many calls and emails from cities that want to support us in this,” Ms. Ramos said.