Advertisement
The Newspaper for the Future of Miami
Connect with us:
Front Page » Opinion » Use wisdom that gave Miami Dade College great leaders 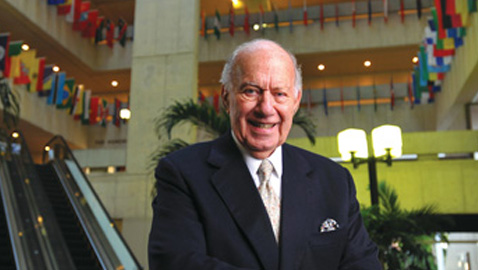 Miami Dade was shaken as the president of the famed public college announced he would step down after a long, acclaimed tenure. Some doubted he would be replaced by a true leader to carry the college forward. Troubling times indeed for the community.

That is the situation today as Miami Dade College awaits its trustees’ action next week on a successor to Eduardo Padrón. But those words equally describe the foreboding 24 years ago when Dr. Padrón’s predecessor, Bob McCabe, revealed he was stepping down and leaders prayed that trustees would do the right thing in selecting the proper person to guide a community treasure.

In hindsight, the trustees of 1995 couldn’t have done better: the college rose to greater heights every year under the educator they selected in Dr. Padrón, who had been number-two to Dr. McCabe. Honors for the college, the president and the community have been numerous and impressive – as have the college’s hundreds of thousands of successful graduates.

The first step to that winning transition came in a March 14, 1995, memo excerpted here from the then-chairman of the trustees, the late attorney Martin Fine of Holland & Knight, whose community conscience was fabled. His wise words to trustees about the difficult steps to replace a nationally known educator apply equally today. Current trustees next week would do well to study them and heed their call, which led to selection of the college’s second in command as president.

“The president’s announcement presents this institution with the greatest challenge it has faced in 15 years. We now need to find a new president who has the talent, energy and compassion exhibited by the first two presidents. Under Florida law, the ultimate and final authority for the selection of that president rests in the hands of the district board of trustees.

“I believe that you can never replace a great leader like Bob McCabe when he retires – you can only attempt to find a worthy successor.

“As we prepare to perform this important responsibility, we should be mindful that this is a very strong institution. It is widely recognized as the finest institution of its kind in the world. It is, by every measure, not only the biggest but the best. It has provided the gateway to opportunity for several hundred thousand people. It has the stature and promise to assist many more….

“…We need to retain an executive recruitment firm to assist us…. I will ask this board to involve representatives of the faculty, staff, student body, the M-DCC Foundation, and the community in the search and screen process….

“When it comes to evaluation of the finalists and the making of an ultimate decision, however, that will fall to members of the Board of Trustees alone….

“We must all have a clear focus and strong agreement on where our community college needs to go, both from the perspective of our community leaders and the people on campus. These elements do not necessarily come together comfortably. However, there is no other choice. Change starts with a strategic plan – then a climate must be developed that will allow M-DCC to move forward.

“I feel certain that this board is up to the task before us.”

Wise words. Mr. Fine correctly assessed that the college’s board in 1995 was up to the task with a choice who spearheaded the college’s growth in size, scope, and stature.

The question is whether today’s mostly untested trustees who are new to everything about the college and their own roles will have the wisdom and maturity to preserve and enhance a premier institution that is pivotal to our entire educational structure, standing between the public school system and Miami’s enhanced universities.

Before they do their duty to name a president, those seven trustees would do well to study the thoughts of Mr. Fine, a veteran of what has up to now been a totally non-partisan educational establishment.

Mr. Fine was prescient in noting that focus and agreement on what the community needs from the college are elements that do not always come together comfortably. In the current case, trustees followed every step Mr. Fine outlined, from respected search firm to broad-based committee that narrowed the hunt to four educators, only to have the governor name new trustees who threw out almost everything that was done and aim to start over. That step is rumored to target for president someone who has never been in education other than as a student.

Fortunately, that hasn’t happened – yet. Trustees are to decide next week what to do.

Fortunately, they can do all of that while also being true to the search process by doing what trustees did 24 years ago: pick the college’s second-in-command as leader. The search tapped Lenore Rodicio, the college’s top education official, as a choice to move up. She has spent her career at the college, advancing rapidly while successfully raising funds for the institution.

That selection next week would prevent a gap between Dr. Padrón’s retirement at month’s end and future leadership that can, as Mr. Fine noted, hit the ground running on very familiar and comfortable terrain.

It was wise to search nationally. But in throwing out the hundreds of non-local applicants, trustees painted themselves into a corner: time is up, and the only credible candidate chosen by criteria all agreed upon is Dr. Rodicio.

“I feel certain that this board is up to the task before us,” Mr. Fine correctly said in 1995 as the search was to start.

Seven trustees have the opportunity to prove, if the 2019 process ends by naming the search committee’s sole remaining choice, that after faltering they too can still be up to the task and do the right thing.