Advertisement
The Newspaper for the Future of Miami
Connect with us:
Front Page » Communities » MiMo association sues city over murals 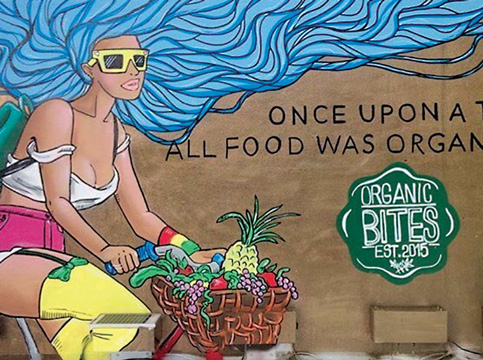 After the City of Miami Commission granted an appeal for a set of murals at a business in the MiMo Historic District, a community organization that sets out to preserve the integrity of the district has filed a lawsuit against the city.

The MiMo Biscayne Association filed a petition this month against the commission’s decision to approve an appeal for murals at the Organic Bites restaurant after the city’s Historic and Environmental Preservation Board found that the murals were not in compliance with the district.

The lawsuit states that the commission departed from the law by reversing the HEP Board’s decision and allowing the murals to remain in the MiMo district “when the governing Code and Guidelines expressly prohibit artistic murals.”

It goes on to say that while the code allows the commission to affirm, modify or reverse the HEP Board’s decisions, the commission is limited by ordinance to rule in conformity with the established code and guidelines.

The lawsuit comes on the heels of another contentious decision by the city commission on a large Puerto Rican flag painted on the façade of La Placita restaurant. In that instance, the commission sent the item back to the HEP board for further review, effectively dooming the flag and forcing the business to create a design that adhered with the district’s code.

The MiMo District, short for Miami Modern, running down Biscayne Boulevard from roughly Northeast 50th to 77th streets, is known for its neon lights and specific color palate. The code pertaining to the MiMo district does not allow for murals without prior authorization from the HEP Board.

Paul Savage, the association’s attorney on the matter, said that while the commission can act on an appellate capacity, the commission must operate within the code.

“Saying something is MiMo-ish is the definition of departing from the code and ruling on opinion or other factors,” Mr. Savage said.

In an email response, City Deputy Attorney Barnaby Min said that the attorney’s office disagrees with the allegations in the lawsuit. He said the city commission always has the authority to amend the city code and is hopeful the city and other interested parties can amicably resolve the issues.

He said that he does not anticipate the commission taking up the issue again unless mandated to do so by a court.

The city commission voted on the item at a June meeting well past midnight, with Keon Hardemon, Wifredo “Willy” Gort and Manolo Reyes voting in favor of the murals. Mr. Hardemon said that the murals agreed with the aesthetic of the MiMo District, noting that the murals depicted women with neon-like hair.

“It still looks like the MiMo district. It doesn’t show anything to me that is offensive to the MiMo District. The MiMo District does allow murals with approval,” Mr. Hardemon said. “We are a body that can give approval. Even the images that are put on this building are very MiMo-ish.”

MiMo Biscayne Association President Alisa Cepeda had asked the commission at the meeting if Organic Bites could be made to add neon lights to the murals to be consistent with accommodations that have been given to other business owners in the area. However, Mr. Hardemon said he would not ask that of Organic Bites.

Ms. Cepeda told Miami Today that the reason the association has taken legal action is not to send a message to the district but to preserve the integrity of the district.

“We really wanted to have a second look at this,” she said. “The decision to appeal is the vehicle that is available to us.”

She said that the association doesn’t want to deter business from coming into the area, and the association was willing to find a compromise that would be acceptable to the parties involved.

“We feel that we have something very special here,” she said. “We don’t want to lose sight and vision of all the things we’ve built in the last 10-plus years.”