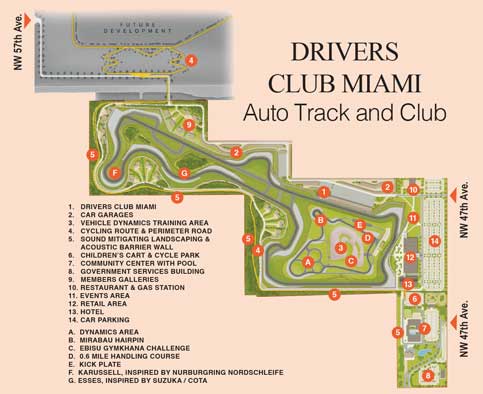 A year after a lease took effect between developers and Miami-Dade County for significant community investments within the Carol City neighborhood, including a luxury private auto track and club, construction has yet to begin.

Zoning agreements, environmental testing, design meetings and construction-preventing covenants have been slowing progress under the lease between Miami-Dade and 13 Pista LLC, the developer behind Drivers Club Miami.

Just this month, according to e-mails disclosed to Miami Today by the developer’s lawyer Albert E. Dotson Jr., 13 Pista completed in full its payments for the second year of the lease, including the annual rent, its $144,000 total capital contribution to the county’s fire department for infrastructure improvement to its fire station on the site, and Florida and county sales taxes. The developer had previously submitted a $44,679.74 overpayment to the county with its first year payment.

“So far we’re on target,” Mr. Dotson said. “We were to also make a contribution to Florida Memorial University, and that contribution has been made for scholarships and an endowment payment.”

Miami-Dade’s $33.4 million, 30-year lease – with two additional 30-year options to extend the lease – to Aventura-based 13 Pista included rights to develop about 160 acres known as the Landmark property at 2000 NW 47th Ave. and NW 199th St., and start construction of new facilities for three nonprofit organizations that were on the site prior to the deal.

The county originally gave the developer a 12-month window to develop the land and start constructing the three nonprofit facilities. Within 18 months, in February 2020, the construction of the Northwest Dade Government Center and community center should be about to start.

As of now, 13 Pista has found a temporary location for His House Children’s Home, ARC of South Florida and the Center for Family and Child Enrichment non-profit agencies about a mile away until their new facilities are completed. They are to be co-located with the YWCA at 351 NW Fifth St. Prior to relocation, on Sept. 25, 2018, the developer gave a letter of intent to the City of Miami Gardens for zoning of the YWCA site, only to get approval eight months later, on June 25, 2019.

“The development process for those three agencies has commenced, including a site plan approval after weekly meetings with the agencies to design their brand-new facilities,” Mr. Dotson said. “We were doing our due diligence on both the Landmark property and the YWCA property and we have been addressing a few issues that came up.”

The Drivers Club Miami project maintains a 19-page list of all it has been doing to move the project forward since the lease took effect on Aug. 1, 2018.

“Over the past year there’s been a lot of pre-construction activity related to addressing environmental issues, getting zoning and site plan approvals and doing the design of the buildings, including the payment of all of our obligations,” Mr. Dotson said.

Despite the now-exceeded 12-month original timetable for 13 Pista to develop the land and begin constructing several segments of the project encompassing 160 acres, its estimated job and economic impact remains the same as a year ago, running over a planned two phases, according to Mr. Dotson.

The cost of design of the development is $5 million to $10 million thus far, Mr. Dotson said. It’s unclear whether this is additional to the initial estimate of the total amount invested.

13 Pista’s total investment will hit at least $100 million, according to Mr. Dotson’s previous statements to Miami Today, and will create about 2,400 jobs, with about 500 on site. At least 220 jobs must be created, per the county agreement.

The maintenance costs of all of the private facilities will be covered by 13 Pista, and Miami-Dade County will continue to be responsible for maintaining the fire station, which is not part of the Landmark property the developer is leasing. The county will pay for maintaining the new Northwest Dade Government Center and community center on the land, which is also not part of the property 13 Pista is leasing.

“We’re constructing the government and community centers but we are not leasing that property,” Mr. Dotson said. The county is to use $7.5 million in general obligation bond proceeds to help finance construction of the 16,000-square-foot government center, Miami Today previously reported.

The community center is to contain a library, swimming pool, cycling track and recreation programming open to all residents in its 15,500 square feet.

A luxury two-mile private auto demonstration track and member’s-only Miami Drivers club-house, vehicle storage and maintenance facilities won’t be open to the public, as opposed to the retail space, hotel, restaurants and parking being open to all.