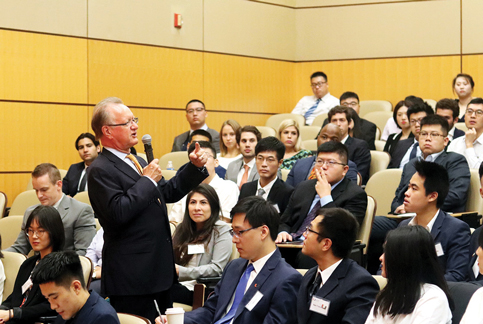 Miami Business School welcomed 225 graduate students from China last week, around one-third of University of Miami’s business school total intake. Chinese graduate student enrollments doubled from last year, and the most recent figures are bucking the trend of Chinese students and their parents who choose Canada, Britain and Australia over US universities to show their displeasure with the crisis in the two counties’ relations.

John Quelch, dean at University of Miami Business School, estimates that for the 2018-2019 academic year this number went down by 13%, reducing the enrollments to about 350,000 students.

The US Department of Commerce counts of foreign student population as generating some $42 billion to the US economy in 2017. For Chinese students, proportionately, this number would be $15 billion to $20 billion, according to Dr. Quelch, as they are much more likely to pay full tuition as opposed to getting scholarship discounts.

“They are coming largely from quite prosperous families and so they are likely to be able to spend more money on housing, food and other services,” Dr. Quelch said.

Florida International University (FIU) is also bucking the trend. The University’s Chaplin School of Hospitality and Tourism Management has 36 students from China this year. They transfer to Miami in their senior year and they either choose to graduate from FIU or decide to later enroll in one of the school’s one-year master’s programs.

In total, the Hospitality and Tourism School’s Chinese population had 118 students enrolled in the undergraduate program in the spring semester of 2019, according to the school’s dean, Michael Cheng. The retention rate of Chinese students is also high, around 83% for the last three years.

On average the school has 30 to 40 Chinese transfer students and this year it added six more compared to 2017. In 2016 the school welcomed 51 students, a higher number than usual, attributed to the year-long presence of Miami faculty at FIU’s partnering institution in China.

Having a strong presence in China is critical to attract students in US universities, and both the University of Miami and FIU are very active in establishing strong relations with the nation.

“We are fortunate to have three professors from China, two of which are very well known there as international experts: professors Yadong Luo, distinguished professor of international business strategy, and Yongtao Guan, a management science professor teaching formerly at Yale,” Dr. Quelch said.

These professors spend considerable time in China, including this past summer, visiting Chinese universities and giving lectures. They are also implicitly advertising the quality of Miami Business School every time they’re giving one of these lectures, Dr. Quelch said.

“We retain very close relations with those institutions that is helping us not only to attract degree program students but also executive education students as well,” he said.

About three months ago the business school hosted 40 Chinese entrepreneurs in the sports equipment and apparel industry who came to Miami for one week of classroom lectures and then visits to key sports teams in Miami. This would not have happened had it not been with the institution’s strong relations with Chinese universities, Dr. Quelch said.

The importance of social media is also key for Chinese students. “The information spreads extremely fast on Chinese social media, especially among young people and especially regarding friends and quality improvements or quality reductions at US universities and colleges,” he said.

Both universities have committed themselves to personally interviewing Chinese applicants, an initiative that has contributed to the increase in Chinese enrollments.

“Chinese students decide on which university to attend based a lot on who they know and on whether they have friends there or a strong community to support them,” said Dr. Cheng. “Having a personal relation with the faculty before admission enables them to feel safe and confident when choosing a program.”

At the University of Miami, all foreign applicants are interviewed on Skype or by video link or on WeChat. In the finance department in particular, faculty members call in to interview Chinese students personally to assess their suitability for the program.

“It is quite unusual for people applying for a one-year master’s program from overseas to receive a call from the chairman of the department, and this personal outreach on the part of our faculty has been very important also in converting a significant number of applicants into enrollees,” Dr. Quelch said.

The Miami Business School takes its relationship with Chinese students one step further. It holds an event to celebrate with Chinese students the traditional mid-autumn festival in October. “Just having that cultural awareness sensitivity to engage in this kind of respectful initiative is really important to our success,” Dr. Quelch said. “I remember that of course many of the students who were there and took photographs, immediately posted those on Chinese social media”.

Upon graduation, the business school’s capstone project, the most important element of the international graduates’ employment, according to Dr. Quelch, allows students to apply their skills to a real-world project under the guidance of a local industry partner. Very active companies among a broad range involved in these activities are Chewy, an online retailer of pet-food and pet-related products, and Office Depot.