Advertisement
The Newspaper for the Future of Miami
Connect with us:
Front Page » Business & Finance » Mega-yacht shiplift coming to renovated RMK Merrill-Stevens 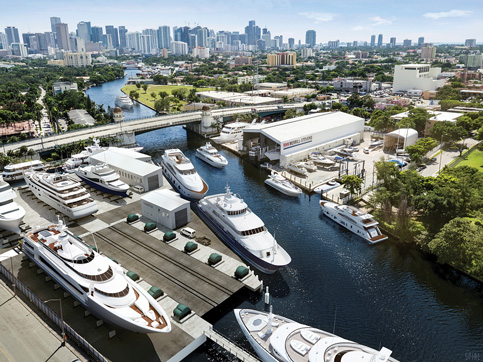 RMK Merrill-Stevens, Florida’s first shipyard (founded in Jacksonville in 1885 and operating on the Miami River since 1923) will open its newly renovated and upgraded North Yard early next year.

The company’s two boatyards straddle the river; the North Yard borders the Health District and the South Yard is near Marlins Stadium. The $30 million renovation, which included dramatic changes to both yards, has been in the planning stages about three years.

During the past few decades, owing to the changing economy and other factors, many boatyards closed up shop and riverfront land was sold to residential developers, said Aaron Leatherwood, president and CEO.

“Merrill-Stevens didn’t sell off, but lost its pulse. The former owners didn’t invest in equipment and didn’t keep up with the latest technology,” Mr. Leatherwood said. “Today’s yachts and mega-yachts are much bigger and more sophisticated than the yachts of 20 to 40 years ago.”

The South Yard was modernized after Turkish industrialist Rahmi M. Koç bought the former Merrill-Stevens in 2013 and christened it RMK Merrill-Stevens. Mr. Leatherwood was hired in 2016.

“When I joined, we hit control-alt-delete, and then reset,” he said. Soon the South Yard was updated with new technology and equipment, including a 100-ton shiplift that can raise a 100-foot yacht out of the water. “There was a lot of new tooling to make the South Yard more attractive to clients as well as to skilled labor,” he said. “The foundation of a successful marine repair is good customer service and a knowledgeable staff of skilled tradespeople.”

The North Yard, he said, was “a complete reboot. We raised the property grade nearly 3 feet and added an all-new electrical structure. We removed the old dirty fill – this yard has been here for almost 100 years – and replaced it with clean fill. We reconfigured the property and added new slips, new bulkheads, new office space. It’s a 100% new facility.”

One of the most important aspects of the new facility is a 2,700-ton shiplift that’s due to arrive in Miami this week, he said.

The shiplift can pull a 235-foot mega-yacht out of the water for repairs and service, he said. “This is larger than anything else in South Florida and gives us the opportunity to service all of the yachts and mega-yachts that visit Miami because of its status as a global destination,” Mr. Leatherwood said.

RMK Merrill-Stevens also services commercial vessels as well as the 87-foot and 154-foot offshore patrol boats used by the US Coast Guard, he added. The new lift will enable company staff to work on the larger boats, whereas the previous lift could accommodate only the smaller cruisers, he said. “The Coast Guard patrols the waters from Jacksonville to Puerto Rico; they need a place to go when the boats need service,” Mr. Leatherwood said. “This is very convenient for them and it’s going to save the taxpayers money.”

The North and South Yards will operate as separate businesses, said a company press release, with the South Yard focused on repairs and refits for large cruisers and sport fishing boats.

“The yards will usher in new business and jobs in Miami. The investment in the shipyard will bring an estimated 100 new jobs between the two yards, including positions for technical engineers, marine procurement specialists, and skilled tradespeople,” the release said.

“I applaud RMK Merrill-Stevens’ ongoing $30 million modernization project on the Miami River,” said Horacio Stuart Aguirre, chair of the Miami River Commission, via email. “This famed and storied 100-year-old yacht and shipyard facility now features a new seawall and a 2,700-ton lift capable of lifting world class mega-yachts. This great lady of the ship and yachting industry has the largest lift capacity south of Jacksonville. As a leading economic entity, RMK Merrill-Stevens is currently hiring in order to double its workforce, featuring great salaried jobs paying well above the county average, including numerous skilled technical jobs such as electricians and welders,” he said.