Advertisement
The Newspaper for the Future of Miami
Connect with us:
Front Page » Profile » Ed Marquez: Keeps county finances in line as budget nears $9 billion 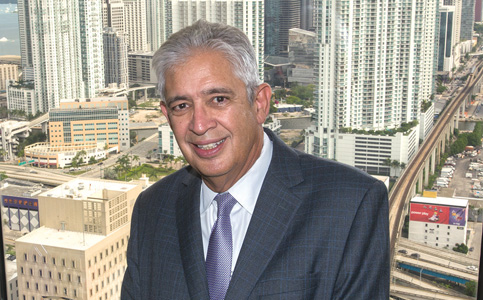 Miami-Dade Deputy Mayor Ed Marquez has seen a lot over the last 40 years, more than three decades of which he’s spent serving the county on and off.

As financial director for the most populous county in Florida – and the seventh-most populous in the nation – he is responsible for overseeing a budget that next year comes close to $9 billion, a nearly $1 billion uptick from the year prior.

His decisions affect a population of nearly 3 million residents, of whom roughly 26,000 are county employees, and a plethora of industries dependent on the county’s yearly operation.

And as with anyone with as long and influential a tenure, he’s developed a system to ensure that the decisions he makes are based on good information and accurate calculation.

“After all these years, I have a handle on what needs to be done and have developed a fair amount of intuition,” he said. “I don’t keep a ton of numbers in my head. It’s more of a feel for how numbers flow, and I can visualize the movement. I then work up a summary spreadsheet for myself to verify what I’m reading or am being told.”

Credited for bringing Miami back from the brink of bankruptcy during a one-year stint as city manager in the mid-’90s, Mr. Marquez has worked in several forms of government administration.

The structure, he said, is less important when it comes to running a successful government than the people within it and their willingness to work together for the benefit of the populace.

“I’ve worked in a weak mayor system, an executive mayor system and a strong mayor system, and it all depends on the people and the relationships between the parties,” he said. “If you have a strong mayor or manager who doesn’t get along with their commission, or council people who don’t work with one another, that’s going to be problematic. So it depends. At the end of the day, the public needs to elect people who can cooperate with others.”