Advertisement
The Newspaper for the Future of Miami
Connect with us:
Front Page » Top Stories » Aviation bonds to save Miami-Dade $28 million

Aviation bonds to save Miami-Dade $28 million 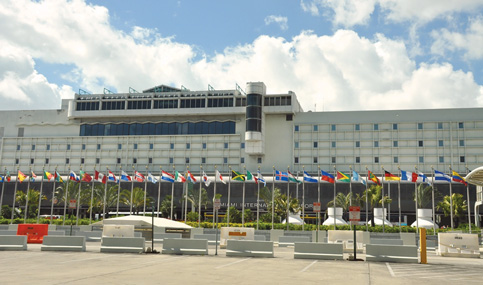 In a move that will save nearly eight cents per dollar owed, Miami-Dade commissioners have authorized issuance up to $400 million in aviation revenue refunding bonds to repay bonds sold to fund prior capital improvements at county airports.

That includes an initial $351 million to refund and redeem all or a portion of outstanding bond series, as well as premium and debt service costs, for:

Issuance of the bonds and underwriting fees will cost about $3.26 million, according to a July 23 memo from Deputy Mayor Ed Marquez, which noted that savings from the refunding bonds – structured as fixed-rate current interest bonds – exceeds the county’s 5% savings threshold which must be surpassed in order to refund bonds.

“Based on market conditions as of June 17, 2019, the proposed refunding generates a debt service savings of approximately $28.2 million over the life of the Series 2019 Refunding Bonds, representing a new present value savings of $23.8 million or 7.6% of the amount of the refunded bonds,” the memo said.

Potential developments listed that could lead to a downgrade, conversely, include added capital spending and borrowing, material losses and increased volatility in aviation activity.

“Miami currently ranks in the top two positions for US airports in terms of nonstop international destinations and international air cargo tonnage,” the report said. “Still, Fitch views future traffic stability as an ongoing risk given the elevated concentration of traffic from [American Airlines’] operations as well as the airport’s exposure to Latin American economies.”

The Aviation Department’s preceding $6.5 billion capital improvement plan, which began 1993 and for which all of the $6.2 billion in authorized aviation bonds have been issued, is now “substantially completed,” Mr. Lack and Mr. Lehman wrote.

Miami International Airport is roughly $5.3 billion in senior-lien debt, which translates to about $240 per enplanement, they wrote.

The Aviation Department is now gearing up for a new $5 billion capital improvement plan, which county lawmakers approved in May, consisting of five “sub-programs” centered on Miami International Airport’s North, Central and South terminals, cargo facilities and various other upgrades, including up to two new on-site hotels at the major hub and improvements at the county’s four general aviation airports.

Through 2025, the report said, the county will spend about $1.5 billion on the new plan.

Fitch called the new plan “forward-looking,” with risks “more manageable” than in previous plans, in part due to the plan’s structure that allows projects to start and stop as-needed.

“Here, everything is phased,” Mr. Sola said. “You’re not in a rush to do it all, and there may be projects [we initially planned] but the airlines may say, ‘You know what, we don’t need that anymore,’ so you’ll move that project out and [are] able to move [another] in, which is unlike what has happened in the past.”