Advertisement
The Newspaper for the Future of Miami
Connect with us:
Front Page » Top Stories » As PortMiami rides high, more development deals on horizon 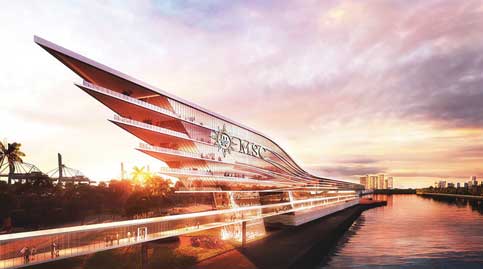 PortMiami, the world’s busiest cruise port in passengers by industry figures, is on course to maintain that distinction for the foreseeable future.

Throughputs at the port in 2018 rose 4.7% from the year prior to roughly 5.59 million passengers, according to the port’s annual financial report. That number represents a new world record, said PortMiami spokesperson Andria Muniz-Amador.

To meet future needs of the port and continue its growth, she said, Miami-Dade Port Director Juan Kuryla next month will bring several more agreements to county lawmakers for approval.

But several major terminal projects at the port are already underway in varying stages and promise to keep the “Cruise Capital of the World” atop international rankings, where it now outpaces its closest competitor by nearly half a million boardings per year.

Construction for Norwegian Cruise Line at the seaport’s Terminal B is now ongoing and scheduled to open in spring 2020. Once finished, the terminal Norwegian calls the “Pearl of Miami” will be able to accommodate ships handling up to 5,000 passengers.

As part of Norwegian’s second amendment with the county for its terminal agreement, the cruise line guarantees it will reach 1.5 million passengers by 2024 and 1.8 million by 2031, up from 1.3 million today.

A third amendment could come soon, however, as PortMiami and Norwegian talked in June of raising the terminal’s construction price tag from $215 million to $235 million, with the county initially fronting the cost and Norwegian providing reimbursement over 25 years.

That amendment would also extend Norwegian’s lease term by five years to 2050 once there is “substantial completion” at Terminal B.

Once built, the new terminals will be able to handle two 7,000-passenger ships at a time.

“This new agreement would bring an estimated 1.5 million passengers through PortMiami each year,” Ms. Muniz-Amador wrote.

Three of MSC’s 15 cruise ships – MSC Seaside, MSC Divina and MSC Armonia – now the seaport’s Terminal F, and a fourth, the MSC Meraviglia, is scheduled to arrive this fall.

Mr. Kuryla told county commissioners in April that the finalized deal with MSC, due back for approval in late October, represents “probably the longest-term deal that we’re aware of in the history of a port and cruise line” and includes “the largest minimum annual guarantee over the term of 50 years.”

A rendering of the planned development showed a green-roofed terminal resembling a ship in fast motion designed by firm Arquitectonica with the words, “Coming in 2022.”

The deal is expected to yield the county nearly $1.7 billion over half a century in ground lease payments plus a $6.19 “wharfage fee” per passenger movement over 2.5 million. That rate is subject to a 3% compounded annual increase beginning in 2023.

“Our continued growth out of [PortMiami] will generate substantial additional economic opportunities in the years ahead,” said Pierfrancesco Vago, executive chairman of MSC, who called the port “the most important home port for MSC Cruises’ fleet in the entire western hemisphere.”

MSC got another business boon in May, when Virgin Trains USA (formerly Brightline) announced that the two parties had entered into a partnership, with MSC serving as Virgin Trains’ official cruise line partner.

How that arrangement will affect Virgin Trains’ relationship with Virgin Voyages remains to be seen, as British billionaire Richard Branson’s Virgin Group has shareholdings in both companies.

Adults-only Virgin Voyages plans to build a 100,000-square-foot terminal in 2021 for two of its new cruise ships. Until the terminal construction is finished, the first of those ships, the Scarlet Lady, will port at Terminal F and continue to sail to the Caribbean throughout 2021, Ms. Muniz-Amador said.

Miami-Dade commissioners in December 2018 unanimously approved a memorandum of understanding with Virgin granting the company first negotiation rights for the construction of the new terminal, tentatively named Terminal V.

Deputy Mayor Jack Osterholt wrote at the time that the terminal’s construction on roughly 5.1 acres at the port would cost up to $150 million. Starting in 2022, PortMiami is expected to gross about $12.5 million from the deal, with 3% increases to earnings each year subsequent.

“Virgin is the latest – but I’m pretty sure it’s not the last – of these deals we’re going to be opening with other competitors in PortMiami,” Mayor Carlos Giménez said. “We expect by 2020 to have 7 million passengers go through the port. I believe when I became the mayor it was only 4.5 million that came through.”

County commissioners last year also signed an unbinding deal with Disney Cruise Line to expand its services at PortMiami with two ships and a possible new terminal on the port’s south side that would allow homeport of larger ships carrying more than 3,500 passengers.

Disney has until March 2020 to negotiate the new deal – which Mr. Osterholt wrote would include a cruise ship pier and terminal complex, provision staging and loading areas, bus taxi staging and a parking garage “of a suitable size” – unless a written agreement to continue negotiations is reached.

The partnership is expected to generate $2.7 million in gross revenues and transport 360,000 Disney passengers through Miami by 2023.

“Due to its success and an aggressive new-build program, Disney continues to seek growth at PortMiami,” Mr. Osterholt wrote. “With three new vessels on order through 2023, the cruise line desires to homeport a large vessel year-round at PortMiami commencing January 2023… and a second large vessel starting seasonally January 2024.”