Advertisement
The Newspaper for the Future of Miami
Connect with us:
Front Page » Government » Another pilot Miami scooter program may be rolled out

Another pilot Miami scooter program may be rolled out 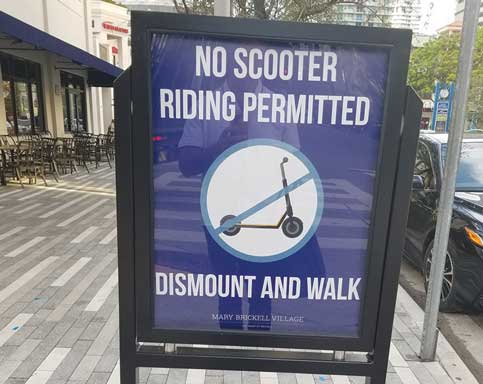 As a six-month pilot program that saw the return of electric scooters to part of the City of Miami nears its end, the CEO of the Miami Parking Authority gave a glimpse of how things have been going and where they might be headed.

“We’re also in a situation where we have almost 1,200 scooters on the street now. That’s what the number is,” Arthur Noriega told the Aug. 7 Off-Street Parking Board meeting. “We have six different vendors, and it’s a little bit of the Wild West now because they’ve all strategically decided they’re going to operate in a certain way with a certain geographic footprint.”

The city assigned the Miami Parking Authority to oversee the scooter program, which now operates in the city’s second district, which includes Coconut Grove, Brickell, Downtown Miami, Edgewater and Morningside.

Mr. Noriega said commission Chairman Ken Russell, who represents the second district, asked for a presentation to update the commission on the pilot program, possibly as soon as the Sept. 12 meeting. He said there may also be proposed legislation to extend the scooter pilot to gather additional data.

In that presentation, to be arranged by the public works department, the commission is to be informed of scooter utilization, revenue, enforcement, and what has and hasn’t worked. Mr. Noriega said the authority will provide raw data on how the program is going, including specific data on each vendor.

Mr. Noriega hinted at program changes that might come down the road, such as scaling back the number of scooter vendors, civic legislation that allows police officers to stop scooter users who are under 18, and penalizing vendors when minors use scooters. The commission will ultimately decide to renew the program, extend the pilot or make the program permanent, as well as make any changes.

While Mr. Noriega said it had been predicted that scooters rolling beyond the district could be one of the bigger problems, it hasn’t been a major issue. He did say that where the scooters are left has been a more significant issue, so having dedicated space for scooter drop-off is being considered.

During the meeting, parking authority directors spoke about dangers they’ve seen with scooter and underage usage, with Jami Reyes saying, “You have parents with little kids riding scooters over the Brickell bridge. I see this every single day.”

“We will not have a responsibility,” Mr. Noriega said in response. “That will be a police responsibility. We can’t legislatively enforce that.”

Board members also asked whether scooter users must ride on sidewalks or roads. Mr. Noriega responded that riders can use either and aren’t limited to bicycle lanes.

According to the city website, the scooter pilot program “will generate revenue to help build and repair bicycle and pedestrian infrastructure in District 2.” Each participating company paid a $50,000 application fee. In addition, vendors pay the city $1 per scooter per day. The city charges companies $25 for any scooter that has to be removed from the streets for being in the wrong place.

The six vendors in the program are Bird, Bolt, uber-owned Jump, Lime, Lyft and Spin. Each vendor was permitted to start with 50 scooters, and allowed to increase to 100 after the first two weeks. Each company can increase its fleet by 25% monthly if demand exceeds three rides per scooter per day.

Back in October, the city commission approved the scooters’ return after the city attorney’s office had gone after the vendors with cease and desist letters. Along with Mr. Russell, Keon Hardemon and Wifredo “Willy” Gort voted for the program. Manolo Reyes and Joe Carollo opposed it, citing safety concerns.

Though the original draft proposal called for a year-long pilot program, the legislation that finally passed was for a six-month pilot program without an automatic extension.