Advertisement
The Newspaper for the Future of Miami
Connect with us:
Front Page » Transportation » After years of study, premium Flagler transit a decade away

After years of study, premium Flagler transit a decade away 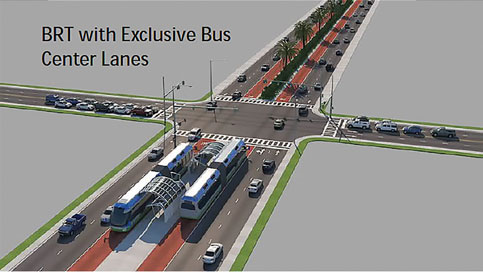 A Florida Department of Transportation (FDOT) milestone timeline, whose dates are “tentative and subject to change,” shows construction starting in early 2025 after 14 prior steps.

Members of the county’s Transportation Planning Organization Governing Board delayed action on the first of those steps – endorsement of one of five proposed development options for the corridor – at their last meeting before August recess.

An endorsement by the board wouldn’t have hitched the state and county to any one development option – that decision would come later after additional analyses and reporting, said Harold Desdunes, director of transportation development for FDOT in Miami.

What it would do, he said, is narrow the scope of evaluation to allow for even more accurate figures.

“There’s a lot of questions and a lot of work that remains,” he said.

But several board members said they’d had insufficient time to review each option, three of which would consign two of the roadway’s six lanes to Bus Rapid Transit and potentially cause more congestion there.

“I’m not ready to vote on something that could be worse for the future of Miami-Dade County,” Commissioner Rebeca Sosa said, warning against making a decision that day and recommending the board’s members workshop each option further. “This deserves a lot of attention from all the members, because… if we go fast and accept one alternative or the other, we’re going to reduce the capacity in our streets.”

Miami Gardens Mayor Oliver Gilbert III, the board chairman, agreed the board needed more time to talk and asked other members if they wanted a workshop as well. After brief discussion over the matter, the board agreed to meet later to evaluate options.

Commissioner Eileen Higgins, whose district is one of several the planned 20-mile route services, also called for at least one smaller meeting so leaders of areas affected could talk potential impacts.

“Somehow we have to be able to discuss what’s working as we go from one part of Flagler Street to the other,” she said.

More deliberation is fine for now if it gets the county closer to making a decision, Doral Mayor Juan Carlos Bermudez said. But for those on the dais who’d already met with FDOT to review the project options, he said, further talks were holding up progress.

“They’ve gone out to meet with a number of us,” he said. “I agree if they want to have a workshop so everyone can hear what has to be heard. [But moving forward, for] efficiency and effectiveness, if they’re going to go out and meet with us… it duplicates time and effort [to call for a workshop afterward].”

FDOT hosted three public workshops in June to discuss the Flagler Street transit route between Government Center and the Homestead Extension of the Florida Turnpike.

A project schedule shows major tasks began with a 2106 initiation and public kickoff with elected officials and agency personnel, environmental and engineering analyses and a public workshop to examine transit alternatives.

Those studies continued until June, according to a project FAQ that said the next step was a recommendation of transit alternatives, federal environmental class and endorsement of a recommended mode by the transportation board.

FDOT Modal Development Administrator Nilia Cartaya, the project manager, said in a June email that aside from a “no-build” alternative that would leave the corridor unchanged, Bus Rapid Transit is the only transit mode being considered for the corridor.

The five development alternatives presented to the board include:

■A no-build option costing $20 million annually that would include only roadway improvements enumerated in the county’s 2040 Cost Feasible Long-Range Transportation Plan but wouldn’t provide additional or improved modes of transportation, system connectivity, pedestrian and bicycle safety, or transit services.

■A transportation systems management and operations option, without dedicated bus lanes, that would cost $90 million to build and $33 million to operate yearly and feature enhanced bus services that costs less than bus rapid transit including transit signal priority and “queue jump” lanes at major intersections.

■“Build Alternative 1,” a six-lane option estimated to cost $478 million to build and $55 million to operate yearly that would repurpose curbside lanes in each direction for buses and right-turning vehicles only, with service frequencies ranging from 10 to 30 minutes.

■“Build Alternative 2” that would cost about $656 million to build and $55 million to operate yearly and similarly repurpose curbside lanes in each direction for buses and right-turning vehicles but feature a reversible center lane for cars.

■“Build Alternative 3,” which would cost about $511 million to build, $56 million to operate per year and involve repurposing the center lanes in each direction for bus use only, with median boarding.

Once the county board chooses from the list, FDOT will refine the project “to minimize costs and impacts,” Ms. Cartaya said in a July 29 email. After that, she continued, the project will go to the Federal Transit Administration, which will tell FDOT and the county what types of environmental documentation is needed to qualify for federal funding.

“Once [it’s] included in the [county board’s] list of financially feasible projects, preliminary design would begin, leading to finalization of funding approach and issuance of a request for proposals to solicit potential contractors to build the project,” she said.

The state and county would then work on final designs, proposal solicitations, rights-of-way mapping and rights-of-way acquisitions, only after which is a federal grant agreement expected, according to the project milestone schedule, which shows revenue service beginning in late 2028.

5 Responses to After years of study, premium Flagler transit a decade away