Advertisement
The Newspaper for the Future of Miami
Connect with us:
Front Page » Transportation » Paving way for signature bridge, I-95, I-395, SR 836 revamp 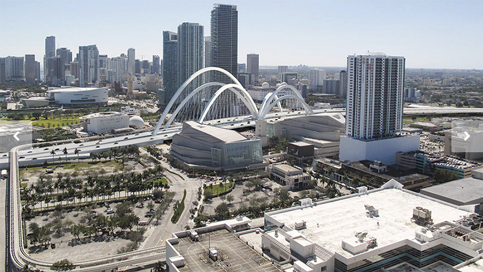 Primary activities began in January for the $802 million public-private project, whose funding is $616 million from the state and $186 million in toll revenue from the recently abolished Miami-Dade Expressway Authority (MDX).

Key parts of the project include construction of a six-arch “signature  bridge” on I-395 spanning 1,025 feet over Northeast Second Avenue and Biscayne Boulevard, a double-decker “viaduct” on SR 836 between Northwest 17th Avenue and the Midtown Interchange, and roadway improvement work on I-95 between Northwest Eighth and 29th streets.

The contractor, he said, has established a work zone on the eastbound I-395 local connector road, from I-95 to approximately Northwest First Avenue, and is working to remove the traffic separators and barrier walls there.

Foundation work on some of the I-395 bridges that are part of the 1.4-mile roadway project was to have begun by early July.

Meanwhile, foundational work on the signature bridge, he said, is meant to begin “probably sometime in December.”

Archer Western-de Moya is now driving steel sheet pile to prepare for construction of bridge foundations of a new connector road on the highway.

According to a roadway closure and traffic pattern advisory on the project’s website, drivers wanting to access the westbound I-395 ramp there will be detoured along a new route whose clear signage, Mr. Gonzalez said, will “absolutely” eliminate any confusion they may have.

“All the static signs will be changed, and we will have additional electronic message boards directing people to the new route,” he said, adding that the Northeast 12th Street closure will allow workers to begin preparing foundation work for the westbound I-395 connector road and signature bridge.

“Those six arches come out of where [Northeast] 12th Street used to be – they’re actually being constructed in the former 12th Street,” he said. “That’s one of the reasons we have to reroute traffic.”

Road workers have established two work zones along the eastbound SR 836, known as the Dolphin Expressway – one between Northwest 17th Avenue and the Miami River, the other from Northwest 12th Avenue to I-95 – to begin bridge-widening efforts.

Archer Western-de Moya is now working over the Lawrence canal and Northwest 17th Avenue to remove the outside traffic railing and will soon drive concrete piles in the areas to begin building bridge foundations.

Foundation work to widen the eastbound SR 836 ramp to northbound I-95 – where traffic backs up regularly while drivers cut in at the last minute, imperiling other drivers – is also underway both during the day within the established work zone and at night when lane closures are needed, Mr. Gonzalez said.

The double-decker portion of SR 836 includes construction of an elevated bridge beginning just east of the toll area at Northwest 17th Avenue and rising over the center of the expressway, bypassing the I-95 interchange to connect to I-395 west of it.

Drivers will be able to stay on the existing bridge or drive up a ramp to access the viaduct’s upper deck, effectively splitting traffic patterns and improving roadway capacity.

“[It’ll] separate those movements so it distributes traffic flow more efficiently and eliminates those bottlenecks you have there, with people trying to go to I-95 north at the last minute or I-95 south,” MDX Director of Engineer Juan Toledo told Miami Today in May 2018. “You’re eliminating a lot of those operational deficiencies by separating those traffic movements.”

On I-95, Archer Western-de Moya is extending a northbound auxiliary lane between Northwest 17th and 29th streets that, once completed, will receive the added traffic from the eastbound SR 836 ramp to northbound I-95, which Mr. Gonzalez said will be widened to two lanes.

Work on the I-95 stretch also includes new drainage, concrete paving and relocation of the median barrier and overhead sign structures.

“In order to accomplish the work, nighttime and continuous weekend lane closures are being implemented,” he said. “[The] contractor is working during the day in areas that do not require lane closures.”

Drivers and residents can find out more by visiting the project website, www.I-395Miami.com, where they can sign up for project alerts, including information on construction activities and lane closures.