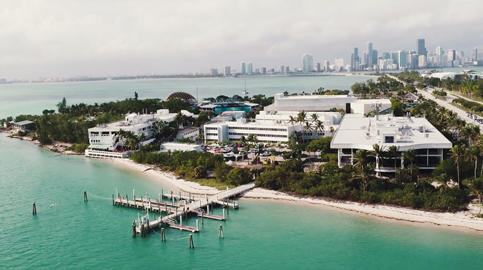 The University of Miami has long had a presence on Virginia Key, and school officials say they were adversely impacted when the Ultra music festival was staged nearby in March.

Ultra is not coming back to the barrier island, and that’s just fine with Roni Avissar, dean of the Rosenstiel School of Marine and Atmospheric Science.

Mr. Avissar addressed the Virginia Key Advisory Board at its recent meeting, as part of the board’s goal of meeting with each stakeholder on the island and learning how the board may collaborate with stakeholders in the future.

The Rosenstiel school has grown into one of the leading academic oceanographic and atmospheric research institutions in the world. The school’s basic and applied research interests encompass virtually all marine-related sciences.

The Rosenstiel school’s main campus is on Virginia Key, at 4600 Rickenbacker Causeway. The Miami Seaquarium is a close neighbor.

“We have grown to be considered one of the top programs in the nation. We are blessed to be able to recruit the best students in the country,” he said.

The graduate students work on a variety of research projects they share with the scientists.

About 40% of the school’s research is conducted in collaboration with NOAA.

The school’s parking lot has room for 280 vehicles. He said they have an agreement with the Seaquarium that it can have spillover parking in the school lot on busy days and the school can use some of the Seaquarium’s parking when it hosts a large event.

And speaking of big events, Mr. Avissar brought up Ultra’s debut on the island this year, after being basically kicked out of downtown Miami.

“When there is a big event at Virginia Key, it has a tremendous impact on our usual business,” he said.

“So, for instance, with Ultra, just to be able to prepare the campus and provide the security that we needed. It’s an extra cost. It’s an extra disturbance. We lost one day of work, and in terms of cash money, what we needed to do was a significant impact,” Mr. Avissar told the board.

He added, “We were not particularly happy about that. There was some scientific evidence that demonstrates also a very negative impact on some of the animals we care for on campus. So, needless to say, we are happy to know they are not going to be coming back.”

The advisory board went on record late last year as opposing the music festival being held on the island, in part due to the potential negative impact on the environment and wildlife, but the vote came after the city commission on a split vote allowed Ultra at Marine Stadium park and near the historic beach.

A study from researchers at the Rosenstiel school found that the Ultra Music Festival was stressful to toadfish.

The interdisciplinary team of researchers concluded that the fish experienced a significant stress response to the elevated noise on the first day of the music festival on Virginia Key.

The researchers found the toadfish experienced a four- to five-fold increase in blood cortisol, their main stress hormone, during the first night of Ultra compared to two baseline samples taken before the event began.

For more than three decades, the UM Rosenstiel School has invested millions of dollars in its experimental fish hatchery and aquaculture research operations. The hatchery contains various species of brood stock fish for aquaculture programs and related studies.

Mr. Avissar continued his presentation to the board, noting the school has positive relations with its neighboring uses and facilities on the island.

The school just celebrated its 75th anniversary, and he noted the school began establishing the island campus in the early 1960s.

“Many of the buildings we are operating in need to be modernized,” he said.

Members of the board asked about climate change and its impact on the island.

Along with studying hurricanes and trying to improve on the models used to predict the weather events, he said the school is noticing interaction with the ocean and area street flooding where it didn’t flood before.

“The climate is changing. The sea is rising. Those are obvious changes. What does it mean to the key? When we’re replacing and rebuilding structures, we need to be thinking about those problems. We have to be smart about it … and make sure the buildings we are constructing are not at sea level,” Mr. Avissar said.

The entire City of Miami needs to deal with this reality, he stressed.

While the Ultra producers chose not to return to Virginia Key, some city commissioners worked to get the electronic music event back to its former home at Bayfront Park, in downtown Miami.

At its July 25 meeting, the commission approved bringing Ultra back to downtown on a vote of 3 to 2.