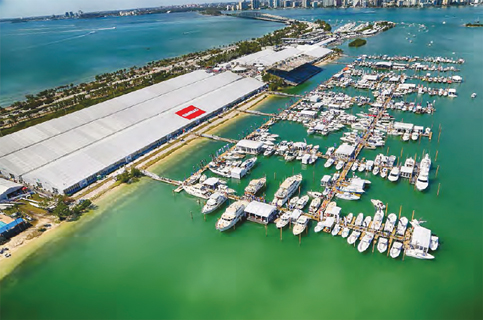 How will the city make a successful go of operating a restored Miami Marine Stadium and the so-called flex park it fronts if the Miami International Boat Show is allowed to continue to close off the public site to other events for four months?

It is a potentially expensive dilemma that the Virginia Key Advisory Board is pressuring city officials to face.

The fate of the boat show and the stadium were top agenda items at the board’s most recent meeting on July 23.

Members of the board were not happy to hear that representatives of the boat show production company were not present to answer questions, leaving it to city employees from the Department of Real Estate and Asset Management, or DREAM, to address lingering issues.

The city owns much of the island, along with the historic waterfront stadium, idled since 1992. The city has numerous projects under way on the island that are expected to impact each other, from a multi-million-dollar restoration of the stadium to multi-million dollar improvements to the flex park acreage that hugs the stadium.

Other anticipated changes impacting the stadium may include improvements to a nature area and kayak launch on a lagoon, potential sporting fields established on or near a county landfill, and the redevelopment of the city-owned marinas west of the stadium.

One board member, Vinson Richter, stated his concern that all of these projects and changes may be on a collision course.

“I see a train wreck coming,” he said, suggesting the board work to gather all stakeholders together soon.

Island stakeholders include a variety of parties, from the University of Miami to Mast Academy and the Miami Rowing Club and others.

The boat show has had a major presence on the island for the last five years, and its five-year revocable license has run its course.

Daniel Rotenberg, DREAM director and a non-voting member of the board, said the city is in the midst of negotiating a new revocable license with the boat show producers.

City officials desire the boat show group to reduce its footprint at the island property and shorten the time it holds control of the site.

One city staffer said: “We want use of the stadium, and condensing the show is a hot topic.”

Mark Burns, lease manager with DREAM, attempted to answer some questions about the boat show asked by board members at previous meetings.

“The next question: Possibility of a reduction in the footprint and duration? There is already a reduction from the first year, when the show stretched to the Rusty Pelican restaurant,” Mr. Burns said. That area was reduced in following years and “they are at capacity,” he said.

“They don’t want to shrink it but we’re trying to push to get it to be a little less invasive on the western side of the property.”

The size of the show also relates to a longer set-up and tear-down period, he explained.

“We are working with them to shrink down the time frame as well, and to reduce the footprint,” he said.

Mr. Burns responded: “My opinion from the meetings that we’ve had is that they’re looking at every opportunity to shrink the duration. They understand it’s an issue and it impacts other events. It impacts the city, it impacts the other people who want to use the flex park. It has a lot of different impacts. It affects users of the basin… They definitely seem very willing to shrink the duration… It’s a matter of manpower and money.”

Ms. Lewis asked Mr. Burns to remind the board, what was the duration period when the relationship began between the city and boat show organizers, and has it grown.

“That’s a good question. It’s not so simply put. Originally, it was a much shorter term. It was only like three weeks before and two or three weeks after. But before the first show actually started, an amendment was done to extend that time to what it is today. So it hasn’t grown in any sense since the amendment to the revocable license was done,” he said.

“It is 70-something days before and a number of days after. I want to say it’s from December, around Dec. 1, through the end of March,” Mr. Burns continued.

“Yes, originally the agreement called for a much shorter period. However when they started doing the set-up and tear-down, obviously this is a brand new site, they had unforeseen circumstances that took place. They didn’t anticipate the magnitude and how long it was going to take for the build-out to take place,” he said.

In answers to other questions posed by the board, Mr. Burns said the boat show reported last year’s attendance was 91,518, consistent with prior years of the show at the island venue.

This year the peak day was Saturday, with 23,000 attending. The show is held in mid-February for five days.

“They don’t envision the show growing much more than 100,000, over the five-day period,” he said.

The boat show has 700 contracted exhibitors. “They are maxed out on space and don’t anticipate this number to grow,” he said.

Mr. Burns said the show generates $854 million in economic activity in the greater Miami area, based on an independent study.

Board Chairman Joe Rasco said the boat show representatives are expected to appear before the board in September.