Advertisement
The Newspaper for the Future of Miami
Connect with us:
Front Page » Transportation » Hard Rock Stadium getting pedestrian bridges, tunnels 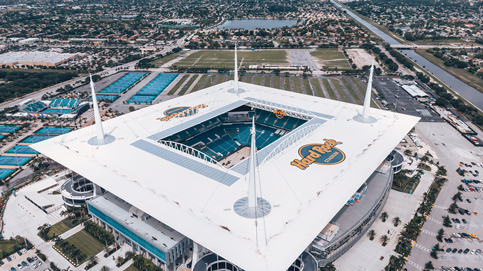 Construction to link pedestrians to Hard Rock Stadium is 70% complete and is expected to conclude in two months. By the end of September, a pedestrian bridge over the Florida Turnpike exit ramp for Hard Rock Stadium, another bridge over Northwest 199th Street (Dan Marino Boulevard) and two tunnels under Don Shula Drive, the stadium perimeter road, are to be ready for public use.

The biggest benefit of the project is enhanced public safety. The bridge will provide a safe way for pedestrians to cross over Northwest 199th Street, where there’s currently no bridge, and the Turnpike Access Road. It will also improve access to Hard Rock Stadium for event-goers.

But safety also will be enhanced for the local community, and the pedestrian bridge above Northwest 199th Street will remain open at all times.

However, the bridge over the Florida Turnpike Exit Ramp, Exit 2X, will only be open during stadium events, according to Tasha Cunningham, project spokesperson. The tunnels will be open at all times to allow access to the stadium’s facilities.

The project is property of the Hard Rock Stadium and cost about $16 million. It’s being funded by the Florida Department of Transportation and Hard Rock Stadium, with oversight by the City of Miami Gardens. Bentley Architects & Engineers is designing the new facilities and Condotte America Inc. is building them.

Any maintenance costs associated with the infrastructure will be responsibility of the stadium owner upon project completion and acceptance, Ms. Cunningham said. The cost to maintain the bridges isn’t known, she said.

The project allows free flow of pedestrian traffic to safely exit the stadium and cross the adjacent roadways. There’s no data about evacuation times, but it’s expected that event-goers who utilize the parking lots that the tunnels and bridges serve won’t have to wait for traffic to clear or wait for an officer to stop traffic.

The stadium owners have been providing the maintenance of traffic for stadium events and detour information being given based on the layout of its property. The lane closures and construction alerts have been very well perceived by the community with no complains so far, Ms. Cunningham said.

“Prior to the start of construction, our team went out into the community and made presentations to community groups and homeowners associations to keep them informed about the project,” she said.

The project will be completed just in time for the opening of the National Football League’s regular season and five months before the stadium hosts Super Bowl LIV. The landmark sports site, projected to host about 2 million visitors a year and generate more than $13 million in sales tax revenues for the state, remains the largest sports and entertainment complex in the county, Miami Today previously reported.