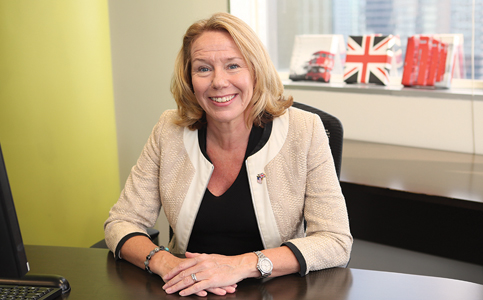 Nicolette Brent felt the draw of public service from a young age, and she came by that sense of duty honestly. Her grandfather had served in the military, and her father was a former mayor and community team leader.

When she graduated from sixth form college, the UK equivalent of high school in America, she forewent university to pursue that interest early.

Height restrictions at the time barred her from joining her hometown police force, so she chose the most immediate option available, hoping another opportunity would materialize. Sure enough, one did not long after.

“I was heavily into swimming, so I joined my local sports center as a lifeguard,” she said. “A month after, I saw an advert in the paper that said, ‘Join the foreign office. See the world as part of the diplomatic service.’ I thought, ‘Ooh. That sounds quite nice.’”

This year Ms. Brent, who became consul general in Miami one year ago, celebrated three decades at the UK’s Foreign and Commonwealth Office. Her career has sent her across the globe in a multitude of vital roles, including deputy head of the Crisis Management Department, head of the Overseas Security Team, team leader of the Global Response Centre, kidnap response in the Counter-Terrorism Department and head of the governor’s office in the British Virgin Islands.

But of all her accomplishments, Ms. Brent said she is happiest with her present assignment, which has positioned her to make positive, lasting impacts while leading a “fantastic and diverse team” in one of the world’s most desirable regions.

“I’ve always chosen jobs I felt were interesting, varied and challenging but doing something I cared about,” she said. “You see ‘consul general of Miami’ on the list of jobs coming up, and I’m pretty sure everyone due to be posted at the time was going for this job. For me to get it is something I’m quite proud of.”